A Special Report From Muhammad Mosque No. 46

New Orleans, La. – As the sixteenth anniversary of Hurricane Katrina approached, the world watched New Orleans and surrounding parishes prepare for Hurricane Ida, that would eventually make landfall as a Category 4 hurricane. Though the city of New Orleans did not experience a direct hit, the city did suffer significant wind damage and one hundred percent (100%) of the city loss electricity.

“I am thankful to Almighty God Allah and His Christ for sparing the city from experiencing what it did sixteen years ago. The majority of the Believers were able to evacuate, and those who did decide to stay took the necessary precautions. The Grace of Allah shown to us personally fuels a desire to work harder,” stated Brother Willie Muhammad, Student Minister of Muhammad Mosque 46.

After making landfall as a Category 4 storm with sustained winds of 150 mph, Ida devastated Louisiana’s power grid, damaging more than 30,000 utility poles, close to 35,000 spans of wire and 5,600 transformers. The historic hurricane knocked out power to more than 900,000 customers across southeast Louisiana. Days after citizens of New Orleans were left with needs for ice, gas, food and other supplies. Parishes outside of New Orleans were greatly damaged. Though miles away, the 10K Fearless First Responders of Austin, TX were monitoring the event while strategizing on how they would provide much needed relief to those impacted by the storm in the city of New Orleans.

“We as the coordinators of the team saw the needs of our people and had to ask ourselves what would Jesus do? And knowing who Jesus is and knowing that He is the head of this team we had no choice but to move out and service our people’s needs, stated Brother Reginald Muhammad, who serves as the Assistant Coordinator for the 10K Fearless First Responders.

“Anyone can be given anything to eat or drink and the people would appreciate what’s being given to them.  In this day and time, we have a Teaching on how to Eat to Live and we know who we are serving (young gods). So, in that case it’s our duty to treat each other accordingly as God has treated us. So, we went in and not only passed out food and water, but other items. We bought the best of the best for our people. This is what we promised the Minister two years ago when I told him we are the new FEMA (F= Farrakhan, E= Elijah, M=Master Fard, A = All together. This is what moves us, the promise,” stated Sister Christina Muhammad, the National Coordinator of the 10K Fearless First Responders.

The team arrived in the city of New Orleans early Saturday morning, after driving from the city of Austin, Texas with truckloads of supplies that ranged from clothing, hygiene products, water, gas and much more!

“Leading up to the New Orleans event, I had a very physically and emotionally demanding week at work. My husband and I were trying to navigate our schedules. When we got off work, we had to rush down to meet Sister Christina to help finish shopping for the items that we planned to give to the people of New Orleans. Everyone was exhausted already, but we had the spirit that we had to get this done for our people. After shopping, we loaded up the trucks and got on the road. No one had been to sleep since the night before.  It was long trip, but we were energized once we got there and saw the believers of Mosque 46 and the people of the community. We worked hard all day long and was met with plenty of thank you’s and God bless you’s along the way, which made me feel good. I pray that Allah is pleased with our efforts. After that long, long day, we headed back home. The work was hard but the payoff in love was worth it,” stated Sister Rica Muhammad.

“When Sis. Christina reached out about bringing down supplies we knew we had to assist, despite Believers dealing with their own personal home issues. We were able to provide a place for the Believers from Austin to stay and used a lot owned by one of the Believers across the street from the Mosque as a staging area for the food and supply distribution. Hundreds of cars got in line to receive food, cleaning supplies, PPE as well as the Final Call Newspaper and books from the MGT on how to clean and keep house. It was an awesome event, well received and much appreciated by the community. Members of the 10K Fearless Team along with members of Muhammad Mosque 46 began passing out much needed relief items to appreciative community members,” stated Brother Jason Muhammad, Student FOI Captain of Muhammad Mosque 46.

Sister Natalia and Brother Carlos, who are currently processing to become members of the Nation of Islam were grateful to Allah for allowing them to be a part of the 10,000 Fearless First Responders distribution team and to serve the community with other believers. They both said the experience was humbling and it was amazing to witness the work that we can do when we all come together.

Even before the 10K Fearless First Responders team made it to the city of New Orleans they had already provided aide and housing to members of Muhammad Mosque who evacuated to the state of Texas.

“Prior to the hurricane making landfall my husband, Brother Reginald, and I had already answered several calls asking if we were helping this year. This is what we do every hurricane season, so this one was no different. Once we heard that a hurricane had hit, we already knew what we had to do. We needed to extend our hands to offer help to the evacuees. We had to be prepared, and that is the whole part of being a first responder, we have to respond first. All thanks to Allah we were ready for our families as they poured into Austin and the surrounding cities.  We are so thankful that we were prepared and ready to assist our people. Then the calls came in and we were honored to house our families in need. As the calls came in, it felt so wonderful to put the believing families into hotels for a week, free of charge while they get the strength to go back home and assess the scene. We did get a chance to feed our families and just show them around and whatever else they needed. I’m so thankful to Allah for the Honorable Minister Farrakhan for showing us true love. We don’t play, follow the leader we walk behind the leader learning how to love ourselves and how to love our people,” stated Sister Christina Muhammad.

“As I watched people receive the relief items, I constantly thought about how happy the Honorable Minister Louis Farrakhan would be if he had the opportunity to observe this. I know it would warm his heart to see the Believers carry out a desire he expressed,” stated Brother Willie Muhammad.

For many of the members of Muhammad Mosque No. 46, this was the first time they had the opportunity to be around other believers of their mosque for some time due to COVID. “It was like being on a detail during our Saviours’ Day celebration weekend, seeing the believers and interacting with the community was really exciting,” stated Brother Vincent X, member of Muhammad Mosque 46.

“The Honorable Minister Louis Farrakhan teaches us that love is a verb not a noun. It is what we do not what we say. Sister Christina, her husband Brother Reginald, and the 10,000 Fearless demonstrates their love before, during, and after disasters. We thank Allah for them,” stated Student Southwest Regional Minister, Brother Abdul Haleem Muhammad.

Plans are also in the works to bring the remainder of the relief supplies to outer parishes that were impacted by Ida in the coming week. For those interested in learning more about the 10K Fearless First Responders and how they can help. Please visit the following website https://www.tenkfearlessfirstresponders.com.

Freedom Marching in Circles While Winding Our Way to Gaza 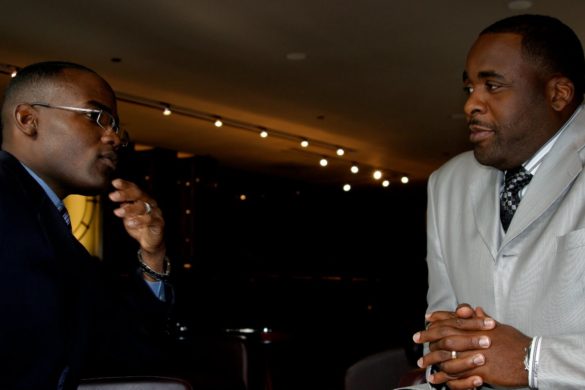 Racial tension flares in Paris, Texas during rally over the dragging death of Brandon McClelland