Whenever some people hear of a rapper coming out of the ranks of the Nation of Islam, it may have been hard for them to take that artist serious in the realm of hip-hop.

Being a member of the NOI, I honestly have struggled with it myself. Donâ€™t get me wrong, we have had some hard-hitting members who have dropped tight bars here and there. But to rank them pound for pound with other well-known hip-hop lyricists was a rarity.

Then came along Jasiri X of Pittsburgh.

I first heard his speaking skills via an online video, but then I heard his lyrical skills on the mic via the song dedicated to worldwide plight of The Jena 6 in 2007. The song Free the Jena 6 caught fire and it caused me, along with others, to pay attention to him.

His name became a conversation piece even more when he dropped I Got That X mixtape, which I purchased while in Atlanta. We paid even more attention.

Jasiri X develops into a lyrical prime minister for addressing injustice to Blacks one bar at a time from the shooting of Sean Bell on the East Coast to the killing of Oscar Grant in the Bay area.

When I received the link to download his 2009 release American History X, I had very high expectations. For the last two years I have been an avid viewer of This Week with Jasiri X, where he delivered two seasons of weekly YouTube videos addressing national and global issues.

Half of the tracks on American History X are taken from his weekly news videos including Dear Debra- A Letter to BET, Ballers and Rappers, Beware Young Girl, Afghanistan (HerStory), and The Only Color That Matters is Green.

I have watched these videos so many times that naturally I thought I would skip over those songs and go straight to the other ones, yet I found myself listening to those over and over. Especially Dear Debra, which is also one of my personal videos of the year.

I will soothe you no matter what level the stress/You are righteous Black queen, not a hot ghetto mess/ And yes, I believe that youâ€™ll switch one day/ But now you so exposed that I wanna rip the runway/ And I know they say that you should shake what your mama gave you/But you are a reflection of how your mama raised you.

A serious jab is delivered by Jasiri to his fellow emcees in the song Silent Night with the question: Do Rappers Watch the News?

While they talkin about old beefs and gold teeth/Iâ€™m talking about freeing minds and they putting souls to sleep/â€¦And they still talkin bout making it rain and Range Rovers with chains around their neck with no brain found on their shoulders.

Then it was time to see what else Jasiri X had to deliver beyond these songs with hundreds of thousands online views. The track for Pyramids, featuring legendary West Coast lyricist Planet Asia, sets the tone of the consistent message through the album.

Militant, diligent, killing it with illest spit/Revealing the syllabus to prove that God still exists/You canâ€™t see cuz you use your eyes/Iâ€™m so cerebral its lethal/Went from so-called Negro to Magneto/Mad people hit me on Facebook to lay hooks/Twitter me for the lyrical wizardry for my delivery.

On Crucifixion he goes at the â€œmad media lynchingâ€ of Black leaders, entertainers and athletes and the track produced by Track Phoenz is hypnotic. The tempo increases with the revolutionary song Real Rap feat. Brooklynâ€™s Chen Lo. The song Blackface addresses the euphoria of the so-called post-racial America, Just A Minstrel weighs in on the buffoonery of the television and State of the Black World paints a vivid reality of the Black community.

You canâ€™t help but get angry while listening to the track produced by King Sym for the song OG3 regarding the shooting death of Oscar Grant. It ends with a commentary by hip-hop journalist Davey D.

To hell with all the yellin/Itâ€™s time for the rebellion.

My multiple listening sessions with American History X came to a close by pressing repeat on the last song Defining Moment. It sums up the mission he has with his music which is to empower the masses in the direction of self-improvement and action.

And I should sign for a billion a line/Cuz Iâ€™m in line with the fulfillment of time/The architect of the building design/Still Iâ€™m crying/Cuz the children are dying.

The hook has become one of my mantras for 2010: 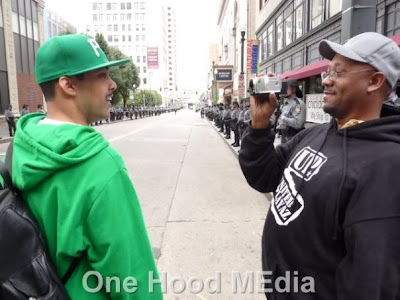 Iâ€™m not much into comparing the styles of Hip-Hop artists because everyone moves listeners in their own way in their own time and space. With American History X, Jasiri X is doing the same thing. Itâ€™s a musical ministry, mental street surgery, hip-hop healing, and a lyrical liberation coupled with his activism beyond the microphone.

Overseen by hip-hop pioneer Paradise Gray, American History X is our daily news delivered from a perspective that FOX and CNN donâ€™t bring. Matter of fact, it isThe Final Call Newspaper in compact disk format to re-format the minds of the people.

This is what todayâ€™s hip-hop is lacking. Keep your eye on Jasiri X.
Album: American History X

National Hip Hop 4 Haiti Day set to be observed in over 30 cities on January 30.

The Fruit of Islam: We are Not Paperboys

Blog Interview: The Final Call’s Ashahed Muhammad on the grounds in Geneva, Switzerland for the UN’s Durban Review Conference

An Unrealistic Expectation?: Interview Series with the authors of IMPACT (Part 3)

Akilah Nehanda-The Making of ‘All the Way Up’ Remix

A Response to Mr. Peter Smith’s article in The Courier-Journal on Muhammad Ali

The Psychology of Rumors: Why They Spread & How To Avoid Being Misled