Beauty, pain, growth and struggle: Why I Wrote â€˜African Violetâ€™

(Source: AfricanHipHop.com) The song is a celebratory apology â€“ an anthem for the beauty and growth in struggle that we often miss, due to lifeâ€™s painful experiences and our own selfishness. Itâ€™s about the nurture and neglect in all relationships â€“ romantic, platonic, parental, spiritual. We look up and before we know it, someone has grown upÂ in spite ofÂ and oftenÂ because ofÂ our lack of attention. Isolated and left alone, they have somehow found strength in themselves, their surroundings, the universe and their Creator.
On one level Iâ€™m writing about the rise of the entire continent of Africa â€“ which Iâ€™ve witnessed up close since 2009 when the African Union named me to the First Congress of African Economists. On another, Iâ€™m describing how I felt when in Nairobi, Kenya, meeting the beautiful people of that country. The song also has layers of meaning to it on a personal level. Itâ€™s very introspective too.
TheÂ African VioletÂ is the first form of life I had the responsibility of nurturing. Itâ€™s one of the most sensitive and delicate plants on Earth. You have to water it in a particular way and raise it with careful attention to light. What gives it life can also kill it if you arenâ€™t mindful of it. My Mother gave me my first one when I was 10 years old, living in West Germany. When you realize that the plant is native to both Tanzania and Kenya, so close to where civilization arose, the symbolism and substance of the African Violet is endless. It is a metaphor for how survival, competition and love can create and destroy. 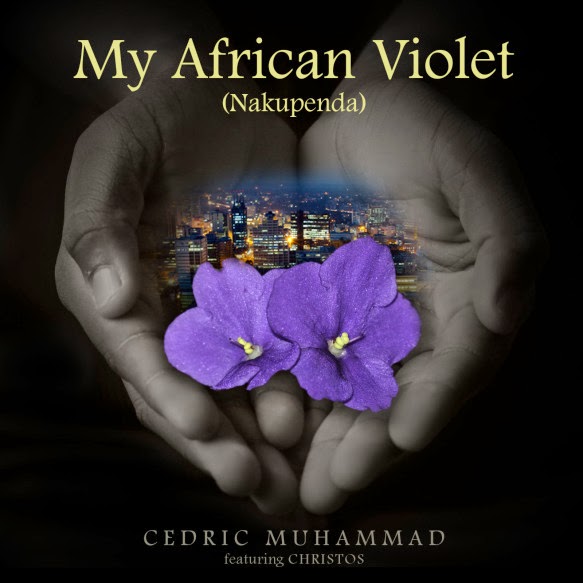 I walked around with this concept for years but never did anything with it because I did not see myself as an artist. Although I started producing music at 15, I fell in love with the business side so young that I put aside the creative element by age 17. It wasnâ€™t until recently that a friend of mine, Cam â€“ an accomplished music producer â€“ convinced me that I should return to the artistic side. That influence along with the love, wisdom and encouragement ofÂ James Mtume, reminded me that I had neglected that side of my being and it was time to gain a fuller knowledge and expression of myself. In that sense the song was therapeutic for me.
When my Father died in 2012 it took me almost two years to enjoy listening to music again â€“ it was such a strong bond and reminder of our relationship. But by listening to his vast record collection, the ear that he gave me became sensitive again and I had so many references for the colors that I wanted to combine in a sound that might not only bring Africa and the Diaspora closer together but people from all over the world.
â€œMy African Violet (Nakupenda)â€ is proof of that. The song is a collaboration of artists from Ghana, Kenya, Sweden, Seattle, D.C. and New Jersey â€“ a marriage between West-African percussion, East African melody, Classical, Go-Go, Gospel, Hip-Hop, Soul and Urban Pop. The first harmony I sought was within my creative inner circle, and then, in the music. [Read More]Â
Click here to listen to My African Violet
WatchÂ The Making Of The “African Violet” Remix In #Nairobi, #Kenya
Beauty, pain, growth and struggle: Why I Wrote â€˜African Violetâ€™ was last modified: August 9th, 2015 by BQ Blog Staff
cedric muhammadMy African Violet

How To Create Your Own Vision Board For 2015 and Start Winning!

‘I’ve tried to not limit myself to any boundaries’: Cedric Muhammad interviews with Shot97 Media about song African Violet

Silent Night (Do Rappers Watch the News?) by Jasiri X

Stephanie Mills invites everyone to watch Minister Farrakhan on July 4

CHILDREN OF THE MOST HIGH: 7 Ramadan Goals for Children

Modesty in the Media

Minister Louis Farrakhan on Hillary Clinton: ‘The Wicked Witch of The West’

ESSENCE Magazine searching for men ready to ask “Will You Marry Me?” in style.

Why a man such as Minister Farrakhan loves us so much: A Response to Kwame Rose

CHILDREN OF THE MOST HIGH: Dinnertime Table Talks