Creative Pause~The Poetry Writing of Brother Jesse…..who would have known? 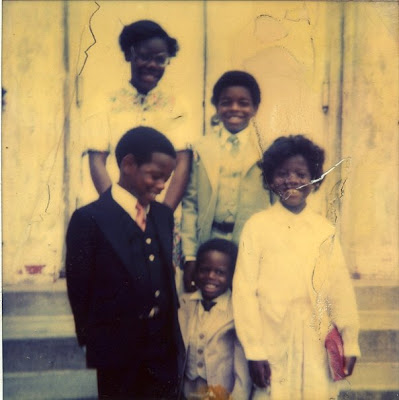 Ok, don’t be alarmed…yes I write poetry too! I started when I was a freshman at Prairie View A&M University, which is where I attended my first poetry event. After my first performance, I was hooked. PV gave birth to a lot of great poets who are headliners in the Houston area. I don’t consider myself on their level but I hold my own. (smile)

Below is a verse from the spoken word song I did as part of the group Poetic Nation, which compromised of members from Muhammad Mosque No. 45. My stage name is AdJAYcent. The song is titled “Creativity”, and we had to write a verse using the names of all of the other members in it. Their names are in bold.

Let me know what you think and I will be presenting more of these during my upcoming exhibit “The Return of the Renaissance Brother”….and yes that is me in the middle of this old school photo!! Same smile.

“Creativity” by AdJAYcent(Bro. Jesse)Out of the triple darkness of space I carved out myspace,

Not the internet but rhymes that make intimate,

Intercourse with the Source that breeds my scripts thatz Magnificent.

Magnifyin your capacity of this creative kingly kaleb capacitor,

With circuitry of the MotherBoard of which I am the ambassador.

I cracked open your atoms, Outspoken in my autonomy,

I rewrote Da Vinci’s Code cuz his mathematics was borin me.

Man of the Sun going about planting seeds,

Separatin the tare and the weeds,

They take root in Red Truth and scattered shade from growing jamil poeTREEs.

I expand my Butterfly-like wings,

That graze the face of Saturn’s rings

Khalil serenates Platoon to keep it still in its orbit,

The moon was soul-Full that it spit out hemispheric lyrics that cover three-fourth,

Not a movie reel but real thots unstopped,

by poetic death angels hovering over the Lambs flock,

Download our creative powers and your essence is unlocked,

Love is the force by which this Poetic Nation will not stop.

Help! I can’t seem to get booked for speaking engagements

What Does Being Overweight Say About Your Health?

Dear Naysayers Part II: “We Won’t Give Up. We Accept The Challenge. Do You?”

The Final Call Chronicles: Don’t Stand On the Sideline and Just Watch for Us

The Characteristics of Leadership: How Do You Measure Up?

Reginald Gordon of Operation Outreach OG1: Refuses to Give Up on Black Youth

Houston students inspired by speaker to change their attitude, love self and compete to be the best.

Part 6 of Black Women in America Raising Boys : “Nothing New But Definitely No Easy Task”