For America to Survive, She Must Make a Real Change

by The Honorable Minister Louis Farrakhan

[The following text is taken from a message delivered by Minister Farrakhan on November 1, 1997 at Celebration’s Banquet Hall in Chicago, Illinois.]

In The Name of Allah, The Beneficent, The Merciful.

Those of us who are preachers and teachers have to analyze our preaching, whether we are imams, rabbis, ministers, cardinals, arch-bishops or high potentates. When you see the decadence that we see everyday of our lives, of what effect is our preaching if our preaching cannot change people’s hearts that they may do better? Or are we preaching a watered down Torah, Gospel and Qur’an that literally tickles the ears of the wicked and makes people satisfied in their wickedness with no pangs of conscience that they are in manifest error?

To read more click on The Final Call online link: For America to Survive, She Must Make a Real Change
Please continue to support The Final Call Newspaper, the only remaining Black-owned national paper in the United States. Plus a UK/International Edition! This is Brother Jesse Blog’s preferred source for news that’s for us and about us. Click the image below to support. 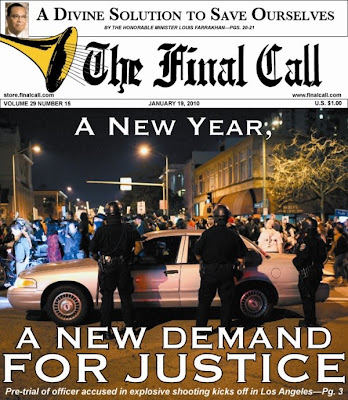 Traveling Through Life and The World: The Autobiography of Akbar Muhammad

The beauty, power and the achievements of Black women

One-on-One with Author, Filmmaker and Youth Advocate Yasmin Shiraz: “Can She Be Saved?”

Back To Breakfast With Farrakhan

The Blacker the “Blog”, the Sweeter the Truth: Jasiri X Launches New Blog

Star Struck: The good, the bad and the ugly of celebrity worship…read in The Final Call Newspape

The Teachings 2.0: Twitter Sayings of The Honorable Minister Louis Farrakhan

No Father. No Excuse! Exclusive Interview with author Joshua Muhammad of Atlanta