On January 16, I delivered the keynote address at the Kirby Middle School Honors Day Assembly, wherein students are given awards for academic excellence in the previous six week grading period.

The theme was “It’s a New Year…Time for a C.H.A.N.G.E. in 2009” and the entire school was present including the administration, teachers, students, and proud parents.

Before my message, the program included performances by Kirby’s K-PSI Cougars step team, songs, the school band, and the entire event was emceed by one of the students. Eighth grade Math teacher Leonette Chenier, who invited me, gave me a nice introduction before I addressed over 350 students on the theme of change. 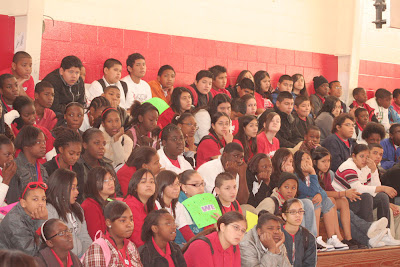 The art department created the stage decoration and the word ‘change’ was turned into an acronym of words that the teachers felt are important to master in order to be successful. So I put my small notes to the side and spoke impromptu on the words that they had chosen. The words were Character, Habits, Attitude, Negativity, Goals, and Effort.

Kirby is located in the area where I grew up in Northeast Houston, so I walk them briefly through my experiences which many of them later said they could relate to. I was blessed to make an impact and was invited to return.

(Please be on the look out for video coverage of this event plus testimonies from the students and staff. Photography of this event is provided by Rashid Muhammad and Hannibal Muhammad)

Dr. King then and now….what would he do?

Ways To Overcome Your Fear of Public Speaking

CHILDREN OF THE MOST HIGH: Dinnertime Table Talks

People Who Read Books Live Longer, According To Science

The Final Call Chronicles: Don’t Stand On the Sideline and Just Watch for Us

Need a Speaker at Your School? Read these Testimonies from Tulane Law Students and others on Brother Jesse