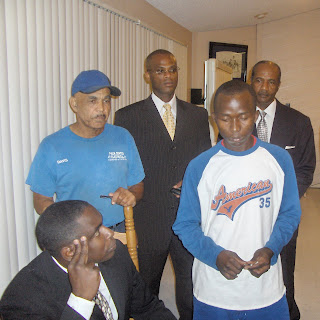 Houston, Texasâ€”In his book A Torchlight for America, the Honorable Minister Louis Farrakhan states that â€œeducation is supposed to be the proper cultivation of the gifts and talents of the individual through the acquisition of knowledgeâ€¦the second purpose for education, after self-cultivation, is to teach us how to give proper service to self, family community, nation and then to the world.â€

With this in mind and Minister Farrakhanâ€™s recent guidance on the need to help our people learn trades, Fruit of Islam members of Muhammadâ€™s Mosque No. 45 launched an electrician school at the Sugar Branch apartment complex.

Attendees of the school will qualify to be electrical apprentices after the first year. The 4-year curriculum will put students in the position to be electrical journeymen. Courses are being offered at no cost but would normally tax an individual to the tune of $6,000 per year at a traditional school.

Veteran electricians Eliot Doucette and Brother Davis X Smith, who have over 30 and 35 years of experience respectively, volunteer their time and expertise to teach the classes. This training is part of the self-improvement study series that the brothers have collectively shared with the poor of the community. The Sugar Branch management has donated its clubhouse in order for classes to take place.

Isaiah Muhammad, who is spearheading the project, said, â€œThis comes from the desire to give our people a chance to gain skills that will be useful for themselves, their family, and for our community.â€

According to the Bureau of Labor Statistics, electricians held about 705,000 jobs in 2006, which is predicted to increase by 52,000 by 2016. About 68 percent of wage-and-salary workers were employed in the construction industry and the remainder worked as maintenance electricians in other industries. In addition, about 11 percent of electricians were self-employed. 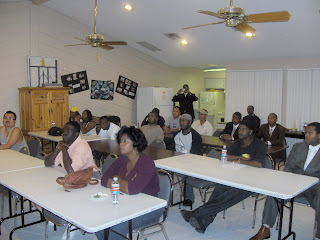 Many enrollees, who were formerly incarcerated, are students in the class and have gained a sense of pride knowing they will have a marketable skill once they have successfully completed the course.

Excited student Michael Washington said, â€œThe class is good and it is giving me a chance to have a profession that I can use anywhere that I go.â€

â€œMinister Farrakhan advised our people that we must be qualified to take advantage of the opportunities that are proposed by President-Elect Obama and to build our own communities. We canâ€™t wait. Letâ€™s move out and get into the streetsâ€, said Mr. Muhammad.

Al-Nisa Designs, by Carmin Muhammad, to be featured in Torino Fashion Week (Italy)

Determination: She cursed me out but I kept on pushing The Final Call newspaper

Interview:: Raising the Standard of Beauty with Neelam Hakeem

My mother, Mavis Jackson, makes a guest appearance on the Today Show as part of “Bald Girls Do Lunch” organization

ARE YOU MEDIOCRE? LET’S SEE….

CHILDREN OF THE MOST HIGH: Start Where You Intend to Finish

CHILDREN OF THE MOST HIGH: Iqra (Read)

Creative Pause~Sade releases new album after a decade….calling all soldiers of love.