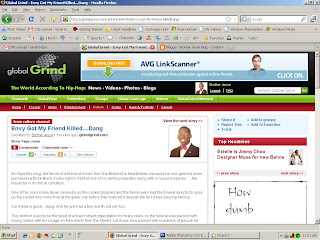 As I type this blog, the family of a friend of mines from the Midwest is heartbroken because he was gunned down last week by three Black males right in front of one of his rental properties along with a house inspectorâ€¦..the inspector is in critical condition.

One of his sons broke down seriously as the casket dropped and the family even had the funeral director to open up the casket one more time at the grave site before they lowered it despite the fact it was pouring raining.

Our friend is gone….dang. And he just had a two month old son too.

This brother used to be the head of a major street organization for many years so the funeral was packed with young males with his image on their shirts from the streets but it was also packed with hundreds of people he had helped over the years with his wealth since he turned his life around from gangbanging. Those young brothers in the streets called him their hero because he was the model of how you can go from living a dishonest lifestyle to becoming an honorable and wealthy businessman.

Techie Techniques: How to buy the best PC or Laptop!

DO WE NEED GOD or AWAY WITH ALL GODS? A debate between Student Minister Robert Muhammad and Sunsara Taylor

Lyrics from Lockdown:: One-on-one with Brooklyn’s own actor and prison activist Bryonn Bain

Columbus Does Not Deserve To Be Celebrated

Whose independence? Words from The Honorable Elijah Muhammad on the 4th of July

The Most Dangerous Mindset That Is Killing Your Success, and How to Silence It

What to Do When Your Account Has Been Compromised

“Why I Have Not Endorsed Any Candidate” by Samaria Rice, mother of #TamirRice