Home Motivation Need a Speaker at Your School? Read these Testimonies from Tulane Law Students and others on Brother Jesse
Motivation

Need a Speaker at Your School? Read these Testimonies from Tulane Law Students and others on Brother Jesse

Originally published 3.18.09
(Blogger’s Note: The following are testimonies from attendees at Brother Jesse’s guest appearance at Tulane University Law School in New Orleans on March 6, 2009. He was the keynote speaker at the screening of a Jena 6 documentary.)
From Annie Johnston, Tulane Law Student and founder of the Human Rights Law Society:

“Jesse’s talk was truly inspiring, in the sense that he reminded us that individuals truly can make a difference. Perhaps the most moving moments in Jesse’s speech actually came when he called up Mychal Bell himself and gave the audience a chance to ask one of the Jena 6 himself about his personal experiences and plans for the future. Mychal was mature and insightful- a testimony to the resilience of individuals whose rights are impeded by what will remain to be a corrupt legal system until there is adequate awareness and open disdain for de facto racial discrimination. With the help of people like Mychal and Jesse, modern civil rights advocates can, hopefully, overcome the overwhelming and lingering racial discrimination that exists in America.”
From Jason Ullman, Tulane Law Student:

“That was an amazing talk. I loved hearing from Jesse, someone who was in on this grassroots demonstration from the beginning. Few of us were around during the civil rights demonstrations of the last generation. But living through the Jena 6 demonstrations and hearing from Jesse gives us a blueprint for how to criticize injustice that we see. Jesse’s message was powerful: big civil rights demonstrations have to start somewhere; they don’t have to start from the top-down, with a powerful national group telling people to rally; they can start from the ground up too, with individuals standing up against oppression they see, and passing the message along. Jesse’s message was powerful because it showed us that we all have the power to bring about change, and Jena was an example of individuals trying to do that on a massive scale.“ 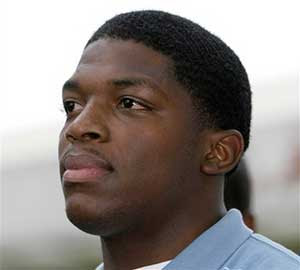 From Emily Ratner, Event co-coordinator and NOLA activist:
“When Jesse starts talking, the energy in the room changes. His audiences are immediately engaged, and, especially this time, I found myself on the edge of my seat. Jesse’s so dynamic that I think he could make a restaurant menu sound fascinating, but he definitely doesn’t slack on content. He always keeps his talks current while contextualizing his points in his personal history as well as the history of the social justice movement, and everything he says is perfectly tailored to his audience. In this case he was speaking to law students, so he stressed the importance of lawyers to social justice work.

In the case of this event Jesse saved the best for last: He surprised his audience by calling Mychal Bell, of the Jena 6, and holding the phone to the mic so the audience could speak directly with Mychal. Hearing Mychal speak was truly powerful. For me, that experience transcended my analytical mind and settled into my very core. And really, how many times can you say a speaker has given you that experience?”

“Jesse gave such an amazing talk at Tulane Law School. As always, he electrified the crowd. Most of the folks there were young White students who were fairly new to these issues, and I think he was able, in his charming and humorous way, to open up their eyes to so much. There was such an incredible energy in the room. People were hanging on his every word, as he began with his personal story, and moved into telling his story about his work with the Jena Six families. Then, just when the event seemed like it had hit its peak, he brought on Mychal Bell, via speaker phone, for a question and answer period. This young man who has made history, who has had tens of thousands of people marching and chanting for his freedom, who has done very few media interviews despite being highly in demand, was there to answer questions for this gathering of students. I think everyone in the room knew that they had the special privilege of being there for something historic.

That is what I tell people when they ask me about Jesse Muhammad – when you see him speak, you are part of a movement – he brings you into contact with the organizing energy that is happening here in the south in this historic moment.”

Need a Speaker at Your School? Read these Testimonies from Tulane Law Students and others on Brother Jesse was last modified: July 6th, 2015 by BQ Blog Staff
Brother Jesse Muhammadmotivational speakertestimonials

T.I. comes to Houston and speaks at Texas Southern University!

Discussing #BlackLivesMatter, the Teachings 2.0 of Minister Farrakhan and social media warfare on Thru The Eyes of Faith

CHILDREN OF THE MOST HIGH: A Loving Parent, Disciplines

The Final Call Chronicles: We Are Here to SERVE

CHILDREN OF THE MOST HIGH: 10-Point Birth Plan

CHILDREN OF THE MOST HIGH: Pacifier Woes

Will I see YOU At the FREE Houston Tweet Up Networking Event on July 1st? Let’s connect offline.

Chicago Blogging~Have you ever visited the legendary Final Call building? A must see.

CHILDREN OF THE MOST HIGH: A Mother’s Advice to Her Son?