One-on-one with Queen Yonasda: A special story of Trials, Triumphs and Music

(Blogger’s Note: According to her distribution company, 101 Distribution, female Hip Hop artist Queen Yonasda (pronounced Yo-Naja-Ha) is bringing back heart and soul to the culture. Her debut album “God, Love & Music” was released worldwide digitally in early July and she hosted a major album release party in Phoenix. I attended and sat down with her to get a deeper understanding of the great young woman behind the album that has received positive reviews.)

Brother Jesse: Who is Queen Yonasda?

Yonasda: I am a proud Ogalala Lakota Native American and Black female rap artist. My mother who passed in 2003 was a full blooded Native American from Pine Ridge, South Dakota and my father was an African-American from Brooklyn, NY. My mother Wauneta Lonewolf worked for Muhammad Ali and that is what introduced her to the Nation of Islam. She began working for the Nation of Islam and assisting Hon.Min.Louis Farrakhan on the re-development of the Nation of Islam during the early 80’s. The federal government didn’t like what Farrakhan and the Nation was doing so they had to find someone with some type of record to try to see if they could have someone snitch and they found my mother. Because there wasn’t anything to say nor did my mother say anything she was sentenced several years in a federal prison.

During that time the Farrakhan family adopted my brother and I. During all the trials and tribulations of my life, living from house to house, experiencing the feds taking my mother, being adopted to a beautiful and loving family, losing my mother to lung cancer, being a single mother, being homeless, and trying to make my name in a male dominated industry… music has always been my escape!!! And because of the freedom of Hip Hop that was my way to tell the truth, and my testimony.

Brother Jesse: How does it feel to release your first album?

Yonasda: Oh my God! Praise God! This has been a dream that has come into a reality! It still hasn’t hit me yet,but I am sooo excited! I am blowing up my team like ” Ok what you got working? “What am I doing, next?” etc.etc because it doesn’t just stop at your album being in stores, Oh no I’ll be a fool to think that. This is just the beginning. I worked 5 years on this album with no budget. I revealed ALOT of myself on this project , its all a true story, nothing sugar coated and I now want the world to hear it because I believe through my story and my music, the next person may identify through it and it may change their choices for the best.

Brother Jesse: What unique flavor do you bring to the music industry?

Yonasda: Its funny you ask that. I am still learning as I’m growing. But I have a fusion of soul, R&B, rock, salsa, hardcore,club,etc, sound to me,. My distribution company heard my album and was like we don’t know who your demographics are because we believe everyone can relate to your sound. I told them that is how hip hop is supposed to be. A mixture of it all.

Brother Jesse: What are your two favorite songs on your album? Why?

Yonasda: Mmmm. Thats a good question. I think “Presence of You”. It is a love song about when you first meet someone and you want to tell them you want them to be yours ..but you don’t wanna move to fast to rush them away so you just gotta be in the presence of them and cherish it. The second one is “Struggle in Progress”. It’s a true story for me. Its about when you have a baby out of wedlock and even though you and the other parent are going through it, the child is the blessing.

Brother Jesse: Who has influenced you musically?

Brother Jesse: As a motivational speaker, what are some of the messages you deliver?

Yonasda: I talk about the close relationship of the African and the Native American people. I talk about the influence of females in Hip Hop. I speak about my life and the trials I have been through and how I triumphed from them.

Brother Jesse: How can people find out more about your album?

Yonasda: Its available now on all digital sites, I-tunes, Rhapsody, Amazon, http://www.101d.com/ all digital sites and August 25 it will be dropping in all retail stores. You can also check out my upcoming events on http://www.queenyonasda.com/ and http://www.supamusicnetwork.com/ 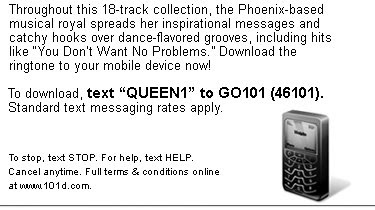 My mother, Mavis Jackson, makes a guest appearance on the Today Show as part of “Bald Girls Do Lunch” organization

The Final Call Chronicles: Testimony – The Right Word Can Save A Life

CHILDREN OF THE MOST HIGH: Gotta Be a Little Bit Nosy

CHILDREN OF THE MOST HIGH: Nature Must Be Nurtured

Through the Lens of Brother Jesse: “My Hands. Your Braids. One”

Itâ€™s Hard Not To Judge A Book By Its Cover

Creative Pause~Sade releases new album after a decade….calling all soldiers of love.