The day had finally arrived.

On Thursday, November 5, I attended the Houston premiere of this highly anticipated project by Deric Muhammad and producer Lawrence Moody of Moody Entertainment. The “Raising Boys” documentary.

To walk up to the Angelika Theater and see the the name “Raising Boys” in lights was inspiring. A red carpet was laid out for attendees to take photos in front of the official banner. The welcoming table had bottled water with “Raising Boys” labels and I watched as people rushed in not to miss one second.The emcee for the opening program was our mother Mavis Jackson, who is also a member of the cast. Following her welcome, we heard from co-sponsors, Houston Council Member Jarvis Johnson and Ricky Anderson of the Black Broadcasting Network (BBN). One of the lower level aisles was lined with 200 gifts bags for single mothers from a Mary Kay representative.

Deric Muhammad gave a little background about the documentary and then it was show time. Before we got half way into “Raising Boys”, you could hear women crying in the audience. Tissue was being passed. Even the men had a serious look in their eyes, including myself. We watched as Alicia Jackson, Malaika Gardner, and Mavis Jackson shared their personal stories of single motherhood. 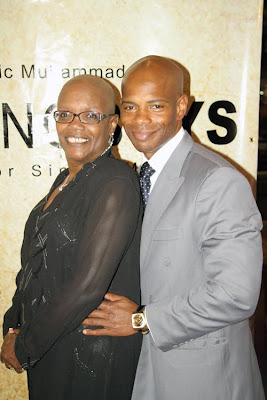 (Mavis Jackson and son Deric Muhammad)
This was coupled with the testimonies of Alicia’s two sons Jeremy and Jacobi; their father is in prison. They miss him. Jacobi cried in the film, and shed the same tears while sitting in the audience this night. His tears caused people around him to cry too. Attorney Sadiyah Evangelista broke down the impact of the criminal justice system in the documentary.
As I watched the documentary, while sending out Twitter messages, I was impacted deeply myself. I have a personal connection to it because Deric is my older brother and his story is our story. To listen to him, my mother (Mavis) and my sister (Alicia) openly share our struggles as a family, reminded me of why this documentary is so needed.
It is a must see for single mothers. No, it’s a must see for everyone. Along with all of the single mothers in the audience, I saw State Rep. Sylvester Turner, Council Member and City Controller hopeful Ronald Green, Yusef Muhammad of the BBN, Olympic Silver Medalist Nia Abdallah and more. A special shoutout to my Twitter connect Kim of Shuddup.com, who flew in from Atlanta to see the premiere.
I will be posting video testimonies soon. To see more photo highlights visit my Facebook Photo Album at: “Raising Boys” Documentary Photo Gallery
-Advertisement-

Virtue Today Magazine: How to find Happiness and Heal from abuse….a must read edition!

Whatâ€™s Next For Hip-Hop? The End Of Its American Colonization

Get into a zone when it comes to excellence. Focus on your P.L.A.N.

Minister Louis Farrakhan meets with and appeals to Jewish rabbis

The Final Call Chronicles: We Continue To Pray For The Full Recovery Of Sir Romeo

AUDIO:: The Courage and Confidence of Covering, At Home and Abroad

Responsibility is a Lifestyle: Itâ€™s Time to Bury Da Beef

Part 7 of Black Women in America Raising Boys : “Iâ€™m not too proud to say..I need a lifeline”

The Final Call Chronicles: Our people are a beautiful people

CHILDREN OF THE MOST HIGH: 7 Ramadan Goals for Children