Houston, Texas–Led by Houston City Council Member Jarvis Johnson (District D), ACORN, the Houston Millions More Movement, Civic Leaders and local Ministers, a huge press conference was held September 30 in the driveway of an elderly resident who has been without electricity for 18 days since Hurricane Ike struck the Gulf Coast.

“My husband has suffered three strokes due to being without lights which has impacted the memory portion of his brain”, said Mrs. Johnnie Taylor, who’s husband is on insulin. “We have been without lights since September 12 and CenterPoint has been promising our lights would be on. Were it not for the assistance of our neighbors I don’t know where we would be.” 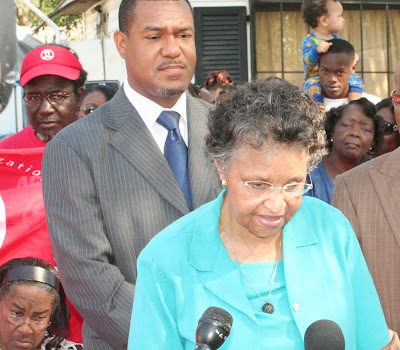 Council member Johnson said “we must ensure that this does not happen again.”

He then proposed a five-point plan of action to CenterPoint officials which included developing a better plan of deployment in response to these situations, devising a better communication model , building a database of critical care patients and elderly customers, getting generators in place at key locations and the need for Centerpoint to rethink their plans to charge people the same energy bill they had prior to Ike although they have been in the dark for over two weeks.

In light of the massive power outages in the aftermath of Ike, CenterPoint Energy failed to restore power to critical care patients and over 70% of its customer base in a timely manner. This has prompted restlessness and anger throughout the city and amongst this group of Acres Homes residents.

“I have been paying $40 a day on gas for a generator and have been without lights for 18 days. You do the math. What’s $40 times 18?”, said Robert Meacum Sr, with oxygen tubes hooked to his nose. “I’m on a fixed income! Centerpoint needs better management. I was expecting an outage but I didn’t expect to go through this.” 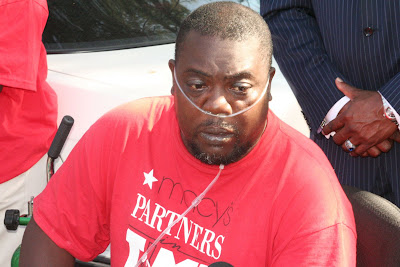 Deric Muhammad, of the MMM Ministry of Justice, stated that “it is a shame that our elderly has had to go this long without power. And it is a shame that CenterPoint is not sending out meter readers and is going to charge people the same rate as prior to the hurricane. This is legalized looting. You all should not pay those bills. Challenge them!” 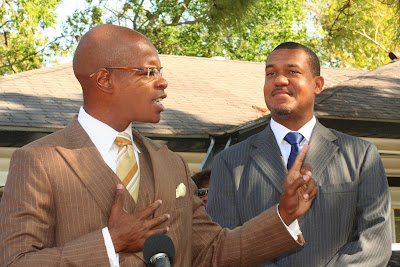 Interestingly in the middle of Muhammad’s words, CenterPoint restored electricity for some of the residents on the very same street. “See, it is no coincidence that they have turned on lights while we are out here. Sometimes it takes us coming together to get things done”, Muhammad said.

Elderly Edna Barlow gave an account of how she has lived in her personal automobile because “it is cooler in the car than it is in my house. I am on insulin, a fixed income and this heat has caused me serious breathing problems. I’ve taken cold showers and boiled water on a Bar-B-Que pit. But I thank everyone that has helped me.” 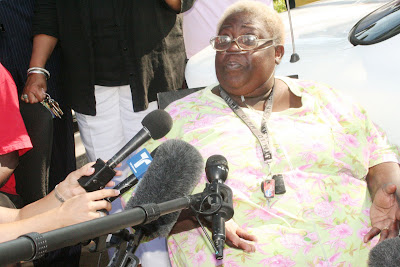 ACORN (Association of Community Organizations for Reform Now) has successfully helped more than 850 victims of Hurricane Ike receive assistance at two neighborhood meetings. “Some people think it’s just an inconvenience for people to be without lights this long but we call it a catastrophe. We are sending letters to the CEO of CenterPoint to let them know they need to be here on the grounds communicating with the people”, said Alana Hill of ACORN. 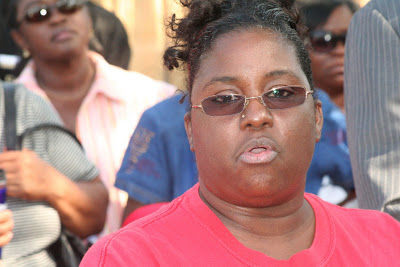 “It is neither practical nor cost effective to operate a 21st century modern city on an electrical system designed in the 19th century”, said Council Member Peter Brown. “We absolutely must better protect our homeowners and businesses from massive power outages due to hurricanes.” 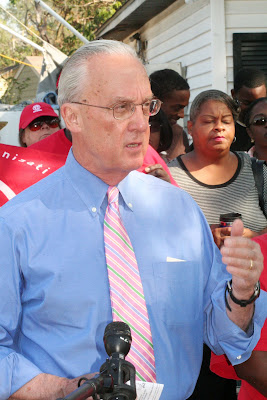 The press conference was closed out by words and prayer from Bishop James Dixon of the Community of Faith Church. “Poverty is hell as it is and we are asking CenterPoint to withhold rate increases during this time. It would be wise, so there will not be an anti-sentiment amongst the people against them. I back Councilman Johnson and others.” 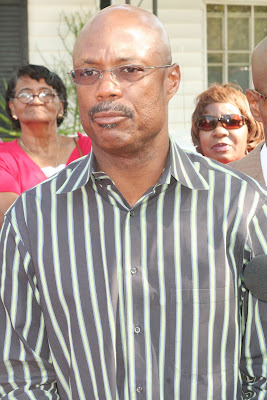 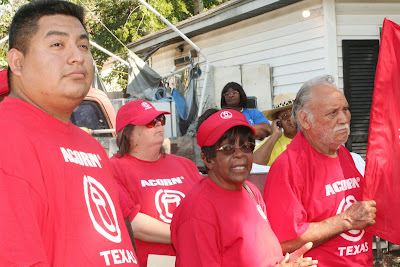 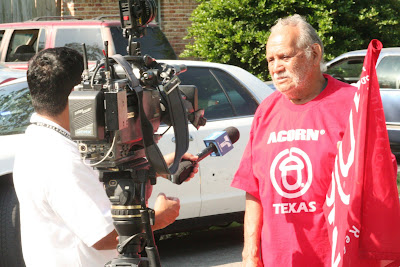