Dr. Martin Luther King, Jr. said, “That dream that I had that day has, in many points, turned into a nightmare.”

Dr. Martin Luther King, Jr. said, “That dream that I had that day has, in many points, turned into a nightmare.”

Dr. Martin Luther King, Jr. said, “That dream that I had that day has, in many points, turned into a nightmare.” was last modified: January 19th, 2017 by BQ Blog Staff
January 19, 2017
0 Facebook Twitter Google + Pinterest

MEMPHIS (Source: FinalCall.com) – Prior to the delivery of his message here on the evening of Aug. 20, the Honorable Minister Louis Farrakhan was led on a private tour of the National Civil Rights Museum at the Lorraine Motel.

The location is well known because it was on the balcony of the motel where the Rev. Dr. Martin Luther King Jr. was shot down by an assassinâ€™s bullet April 4, 1968. The museum opened in 1991 and underwent major renovations in April 2014.

â€œI thought as I was getting out of the car how many of our Christian brothers and sisters, when they go into the holy land, they want to visit the place where Jesus was born, they want to visit the place where Jesus gave his life for humanity,â€ said Min. Farrakhan. â€œAs I stand in this place, it is really a sacred place because here is where our brother gave his life for a cause that would make men free of ignorance and hate, and it really is a great privilege to stand in this place, especially on the balcony where he gave his life.â€ [READ MORE]

Over 2 billion Christians around the world are observing Easter weekend, closing out today with “Resurrection Sunday”. I do not observe this holiday but I remember when I was a young man growing up in BeBee Tabernacle Church in Houston, I was always given the task of singing an Easter Sunday solo. The song was “Jesus is the Answer” and I would be sweating bullets under my suit from the department store Weiners.

And I remember asking my pastor for the meaning of that song and he said “One day Jesse you will come to know it“. I did learn. Thank you Paster Covington.

I also remembered that today marks the 42nd anniversary of the assassination of Rev. Dr. Martin Luther King, Jr. I am not posting this to debate philosophies about violence vs. non-violence, hate vs love or mobilization tactics.
Rather this is just a blog of gratitude for his sacrifice and the sacrifices of his late wife Coretta Scott King and their children. When I was a student at Fonwood Elementary, I remember us only talking about Dr. King during Black History Month when we would do short reenactments of moments during the civil rights movement era. It was during that time we only quoted the “I Have A Dream” speech, so naturally we only saw him as that–“The Dreamer”.But as I got older and read more, I saw Dr. King as more than a dreamer. He was a community soldier and in his last years he began to speak truth to power that disturbed the leaders of the United States at the time. 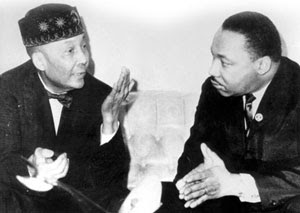 Because they preferred that he just focus on integrating toilets and restaurants than for him to start speaking out against the Vietnam War. By the time of his death in ’68 at the Lorraine Motel, he had refocused his efforts on fighting poverty along with beating the anti-war drum.
He spoke out–his mindset was changing.
At only the age of 39, gone too soon.

“An individual has not started living until he can rise above the narrow confines of his individualistic concerns.”

“Nothing in all the world is more dangerous than sincere ignorance and conscientious stupidity.”

“In the end, we will remember not the words of our enemies, but the silence of our friends.”

“The moral arc of the universe bends at the elbow of justice.”