On Saturday October 25, the McClelland family along with a host of grassroots organizations and residents gathered at Leon Williams Park in Paris, Texas to attend an afternoon Memorial Service for Brandon McClelland. His mother, Jacqueline McClelland, could barely hold back tears.

“As I have said before, with everything in me I will fight this thing all the way through”, said Ms. McClelland.

For the first time I met the father of Brandon, Bobby McCleary, who said “A couple of times, I’ve found myself calling him just to see what he is doing. But he’s not here. I just want to hear ‘Pops’ one more time from my son.”

Mr. McCleary also told me he was in the process of getting his son a job with him at the sanitation solutions company he works for before receiving the news that his son was dead. “I was shocked to hear the news”, he said.

The two accused suspects in the case are behind bars facing charges of murder and tampering with evidence. A grand jury is set to convene on November 13.

That is four days before a massive Rally Against Hate that is set to take place on November 17. The mobilization is being led by organization such as the New Black Panther Party, Nation of Islam, NAACP, the Millions More Movement, local clergy, activists and residents.

A the conclusion of the memorial, over twenty car loads of people caravaned to the scene of the crime located in Lamar County. Ms. McClelland went and touch every spot that was circled by the local authorities which marked where parts of her son’s dismantled body laid when they found Brandon McClelland on the morning of September 16….she could not hold back the tears again.

A line of roses were placed in the ground in memory of the 24-year-old and to serve as a reminder to cars passing by….. 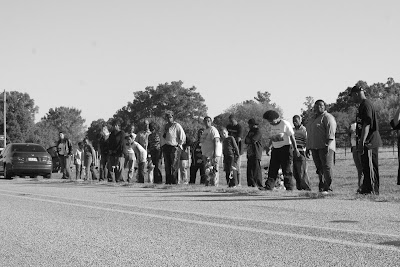