The Misunderstanding of Minister Louis Farrakhan & the Nation of Islam

The Honorable Elijah Muhammad wrote, “Of all of our studies, history is most guaranteed to reward our research.” History examines the patterns of human behavior and relationships, providing its student with a striking understanding of context. A cursory examination of Black history indicates that every great leader we have produced has been met with a litany of obstacles and controversies that impacts their ability to work on behalf of the people. Many of those whom we presently honor did not receive such honors while they were alive. Why?

With more than 60 years of dedication and unwavering commitment to the liberation of All Black People, Minister Farrakhan stands as one of our most consistent and successful leaders. Although he has received praise from global leaders such as Fidel Castro, Kwame Toure, former Ghanaian President Jerry John Rawlings, and Yasser Arafat, Minister Farrakhan remains the central, most controversial figure in Black America. The hatred that is summoned at the sound of his name is rooted not in treacherous action, but the following myths that disguise the underlying truth that exposes them.

Some oppose Minister Farrakhan on the assumption that he, and the Nation of Islam are responsible for the assassination of Minister Malcolm X. However, in a January 22, 1969 memo, the FBI actually take credit for the assassination of Malcolm X through the Counterintelligence Program (COINTELPRO). COINTELPRO is the same program responsible for the death of Fred Hampton, Mark Clark, and countless other Black Leaders. Malcolm’s secretary, Ms. Sarah Mitchell stated the following in regards to the night before his assassination:

“He said now anyone could kill him and everyone would blame the Muslims … He said, ‘We’ve been set up, and they succeeded.’ Malcolm X planned to recant his criticism of Muhammad at the Harlem rally that afternoon, Mitchell said, but he was gunned down before he could do so. She disputes a widely held belief that angry Muslims were behind the assassination.”

Although I acknowledge that the spiritual views of Minister Farrakhan & the NOI in regards to Queer & Transgender identities is rooted in Islamic beliefs that conflict, I believe that we can work toward Operational Unity with love at the root. On March 25, 2011, Min. Farrakhan stated, “I love my people who are lesbian, homosexual, transgender. Don’t make no difference, I love you.” The words are very clear and are supported by his actions. Not once, has the NOI or any NOI member committed physical violence upon our Black LGBT family; and we welcome opportunities to build and heal any unintended pain in unity. Furthermore, the love of all Black people is not a transaction; or a consequence of Queer & Trans contributions to our struggle; rather a deeply spiritual and pure love of all Black people.

Gwendolyn Rodgers, a National Black Justice Coalition Emerging Leader (a Black LGBT Advocacy organization) examines this unfortunate reality in this beautifully written article. Gwendolyn asks us to reevaluate our perceived differences and consider, “Can we not operate in our silos for a common cause of liberation? Or do we not want to be truly free?” Is it possible to create unity without uniformity? To listen through disagreement?

What has been most interesting around the charges of misogyny, misogynoir, and sexism within the Nation of Islam has been the complete absence of the voices of NOI women on the subject. Kathleen Currin interviewed such women and found that “all the women interviewed expressed over and over again that they loved their experiences in the Nation of Islam, precisely because it taught them that they could accomplish what they wanted.” Professor Ula Taylor of UC Berkeley offers that “many women joined the ranks of the Nation of Islam because of the “problematic dynamics within the Black power movement.” In fact, every NOI Mosque is constitutionally mandated to have women in leadership, up to and including Mother Clara Muhammad’s active leadership of the NOI from 1942 to 1947. Similarly, a survey conducted by Dr. Bayinnah Jefferies found that 89% of respondents (both male and female) agreed that “women were always highly respected within the community” and “had comparable roles to men” in the NOI.

Minister Farrakhan’s prolific support of Black Women and girls for six decades has been unprecedented. Phrases like “The Black Woman is God,” or “A Nation can rise no higher than its Woman,” find their roots in NOI theology and Minister Farrakhan’s spiritual exegesis. In 1998, Minister Farrakhan made Dr. Ava Muhammad the first woman to lead a Mosque (Atlanta, GA) in the world. Today, Dr. Ava is his National Spokesperson, a role comparable to the one Malcolm X’s once held. Dr. Ava is a just one example of the type of empowerment, renewal, and upliftment that Black Women across the country experience from their relationship with Islam. Similarly, the Million Man March and Justice or Else gatherings featured legendary Black women, including Maya Angelou and Dorothy Heights.

Since the 1980’s, Minister Farrakhan has weathered the storm of being consistently and repeatedly called anti-Semitic. The accusation has been so intense that it has lead to Zionist protest with slurs such as “Who do we Want? Farrakhan! How do we want him? Dead!” The accusations have been so misleading that the white-led Southern Poverty Law Center classifies the NOI and Minister Farrakhan in the same grouping as the Ku Klux Klan, although the NOI has never been known to purvey violence. The KKK has a long record of murder and terrorism; the NOI has none. The truth of the matter is that the charge of anti-semitism has been used historically and presently to condemn those critical of Israel. Consider this August 14, 2002 interview between NPR’s Amy Goodman and former Israeli Minister of Education Shulamit Aloni:

Goodman: Often there is dissent expressed in the United States against policies of the Israeli government, people here are called “anti-semitic.” What is your response to that as an Israeli Jew?

Aloni: Well, it’s a trick. We always use it.

Anti-semitism is vastly different from a political critique of Israeli imperialism.

Some may suggest that Minister Farrakhan no longer carries relevance, except the controversy that seems to follow him. Min. Farrakhan is responsible for hosting the four largest gatherings in Black History, most recently Justice or Else in October 2015, each averaging at least one million Black people. No other leader has been able to maintain such a strong appeal, especially in spite of a complete media absence in coverage before, during, or after the march. Or consider that under his leadership, the Nation of Islam maintains bases in more than 120 cities across America, and more globally. Countless artists, entertainers, politicians, and other renowned Black folks have embraced Minister Farrakhan publicly; and the Nation’s impact on Black social and political realities has remained consistent. Lastly, the Nation of Islam under Minister Farrakhan’s leadership is one of the only remaining strong, independent, Black Organizations we have.

The harsh reality is that too often our perception of Black leaders is shaped and influenced by white popular media, long standing assumptions, and a sheer lack of knowledge. The notion that he is no longer relevant is as unfounded as it is absurd. The reality is that corporate (read: white) sponsored media has intentionally excluded anything related to Min. Farrakhan, creating the false appearance that Minister Farrakhan is no longer relevant. How does Justice or Else happen and without one corporate (read: white) media entity covering it? The media’s opinion of the Minister can be found in a March 1999 New York Post–America’s 7th largest newspaper–cartoon depicting Minister Farrakhan’s decapitation.

One may not agree with every single thing that Minister Farrakhan says, but certainly 60 years of sacrifice for Black people deserves respect. To his example, we owe gratitude. I conclude with a remarkable reminder from Sister Assata Shakur: “The first thing the enemy tries to do is isolate revolutionaries from the masses of people, making us horrible and hideous monsters so that our people will hate us.”

(On January 14th, The Honorable Minister Louis Farrakhan will be speaking at this year’s Afrikan Black Coalition Conference. For more information see the flyer below and visit: http://afrikanblackcoalition.org/abc-conference/)

I am honored to be speaking at this year’s Afrikan Black Coalition Conference on January 14th. #Farrakhan #ABC2K17

Dr. King then and now….what would he do? 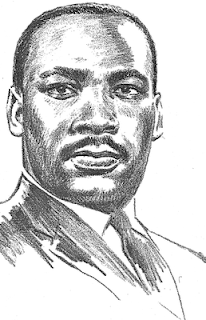 Rev. Dr. Martin Luther King Jr. was assassinated 10 years before I was born. However, as an elementary, middle and high school student, I learned about him once a year through plays, books, lectures and his ever-quoted â€œI Have a Dreamâ€ speech.

But like many of my classmates at that time, I did not truly understand Dr. King.

Something happened while I was attending Prairie View A&M University that gave me a deeper understanding of Dr. King, especially the post-â€œI Have a Dreamâ€ Dr. King. The phenomenal thing that happened was that I was introduced to the words of the Honorable Minister Louis Farrakhan on the life of Dr. King. On one of his tapes, I heard him talking about how Dr. King was more than a dreamer because â€œwhen one is dreaming they are still asleep.â€

This upset me because I wondered why we were not taught these things in school. And this cycle continues in 2009 with schools force-feeding our young people a watered-down Dr. King by omitting his post-â€œI Have a Dreamâ€ years.

â€œCelebratingâ€ Dr. King has even become a lucrative business for corporations and for those today who so-called praise him but never would have been with him post-â€œI Have a Dream.â€

Yet, if Dr. King were here today, his life would be on the line, not because of his efforts to integrate, but because he still would be considered an unsafe Black leader in the eyes of the government. The outgoing Bush Regime has prosecuted an unjust war in Iraq and if Dr. King was here today, he would be beating the drum of the anti-war movement and would not be silent.

He would not encourage our young Black men to â€œbe what they could never beâ€ in the military. He would encourage Black men to do for themselves and to stop depending on the government for anything.

Dr. King would have condemned the Katrina response and the slothful rebuilding that is taking place in New Orleans. He would have marched for justice in Jena, Louisiana and would be advocating for the release of death row inmate Troy Davis.

Dr. King would have backed President-Elect Barack Obama and I believe would be sitting on the platform with him on January 20, 2009 at the Inauguration. But at the same time he would still be pressing our people to take responsibility for their community.

I believe he would want us to honor him, not with parades, floats, songs, dance, plays, speeches, and t-shirts, but by embracing and backing those in our midst today that are taking a stand against injustice.

The fight is not over.