Now, this is something great to march about. What you think?

According to a press release I received from MWH Public Relations, the Fort Bend Pastors Association will join community leaders on Saturday, July 11, 2009 to “March for Thurgood Marshall High School’s Electronic Engineering Academy.”

Following a decision by Fort Bend Independent School District (FBISD) administrators to move the academy from predominantly African American Marshall to Elkins High School, the African American community of Fort Bend is up in arms.

“It is imperative we share our displeasure and discontent regarding the removal of the Engineering Academy from a community that so desperately needs it, wants it, and depends on it,” said Pastor Theodore Deaver, President of the Fort Bend Pastors Association.

Thurgood Marshall houses the only Electronic Engineering Academy in Fort Bend ISD. The Academy offers a variety of intrinsic, academic and experiential opportunities for the students and the community.

Participants are asked to arrive on Saturday morning at Together We Stand Christian Church located on 1430 Texas Parkway @ Scanlin, Missouri City, Texas, 77489, at 8 a.m., dressed in Black or Gold (Marshall’s school colors).

A meeting has been scheduled with Fort Bend ISD Superintendent Dr. Jenny for July 16, 6:30 p.m., at Abiding Faith Church, located at 15376 Fondren Road, Missouri City, Texas. Deaver said the meeting will discuss “the layered issues surrounding the Academy’s proposed relocation, as well as other reasons of which we may be oblivious to.”

I also plan to be in attendance. Due to the invite of the school’s lead librarian Ms. Yvonne Jackson, I was invited several times to speak to the students at that school. They are awesome! So I will be there to support them. 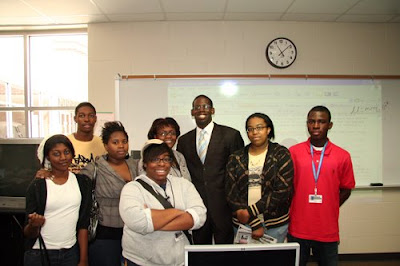