Rosemont, ILâ€”â€œI think one of the problems with us as young people is that we tend to have good ideas but there is no persistence on our part to execute them so the idea isnâ€™t taken seriouslyâ€, said Akilah Muhammad, a freshman at Howard University.

Sister Akilah served as a facilitator for one of the many workshops that provided young people forums to dialogue, strategize, analyze and even debate on the necessary elements needed for this wing of the Nation of Islam to accept their responsibility.

In this particular roundtable on February 28, titled Tell God That Excuse, the goal was to see what is impeding the progress of young people in and outside their immediate circles. â€œOur attitude plays a part in it as wellâ€, said Sister Akilah.

Imani Muhammad of Portland, Oregon asked if there was anyone in the room who brought an idea to adults only to see that idea crushed or ignored. The majority of those in attendance raised their hands.

Marquis Muhammad of Los Angeles then shifted the conversation to the importance of youth following the Restrictive Laws of Islam. â€œI know it is a challenge but obedience to those laws is what gives us powerâ€, he offered. 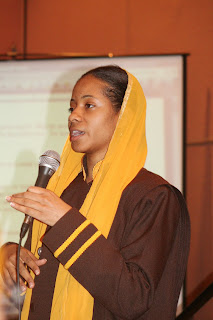 What about parents? Hasaun Muhammad of New York delved into how to make progress when one feel parents and adults donâ€™t understand. â€œThere are roadblocks at times and there is a breakdown in the communication between youth and parentsâ€, he said.

A Wise Man Learns from Other Peopleâ€™s Mistakes

A late afternoon session facilitated by Khadijah Baha of Houston was full of questions and answers with a panel that included Nuri Muhammad (Indianapolis), David Muhammad (Milwaukee), and Tulinagwe Muhammad (Baltimore).

â€œWe can not continue to repeat the mistakes of those before us and continue to make excusesâ€, said Sister Khadijah.

One of the questions posed was how a person can separate themselves from people whom they may love yet that person does not want to do right.

â€œMinister Farrakhan teaches that environment is stronger than heredity. So if you canâ€™t be strong in the environment, you have to remove yourself from it until you have the power to change it and not let it change youâ€, suggested Brother Nuri.