I will admit I took this execution pretty hard.

I went through anger, depression, sadness and was literally sick to my stomach. I didn’t even feel like writing or blogging about it because my head and heart was aching. I fought through it to meet my news story deadlines but this is my first full blog about it since that dreadful night a few weeks ago.

Thanks to the Honorable Minister Louis Farrakhan, I was blessed with the opportunity to fly to Savannah, Georgia for what would be an unforgettable experience.

With so much happiness resonating within the walls of Jonesville Baptist Church, one could have easily forgotten that this was a Down South funeral, that’s usually filled with shouting, hollering, and mourning.

However, on that Saturday morning of October 1, on the west side of Savannah, it turned out to be a celebration of the life of former Georgia death row inmate No. 657378: Troy Anthony Davis.

â€œI was elated that so many people came out. My prayer is that they didn’t just come out for this one day but that they will pledge to carry on the fight that my brother asked us to do,â€ Martina Davis-Correia, Troy Davis sister, told me in a phone conversation afterwards. â€œEmotionally, as a family, we’re not down and out or depressed like people usually are when they lose someone. Troy is only gone physically but his spirit is in us and we will do his work.”

Her 17-year-old son, De’Jaun Davis-Correia, was the only family member to speak during the service for his uncle. I was so impressed with that young man’s strength. â€œWhen I reflect on the times with my uncle, it was never a dull moment. You really shouldn’t be sad all the time, you should be happy, be positive and make the best of every situation. That’s the attitude my Uncle Troy instilled in me,â€ said he said.

He further recalled how his uncle spent many hours with him on the phone assisting with homework. â€œDon’t let his name go in vain,â€ he said. I had a chance to meet him at the repass.

Ms. Davis-Correia said that moving forward the movement will be focused on clearing her brother’s name, fighting to end the death penalty and getting unjust laws changed. â€œThose who killed Troy want us to stop so they can get comfortable but we’re not going to let up on them,â€ she said.

Troy Davis was on death row for over 20 years. Family members, lawyers, prominent leaders, grassroots activists and supporters from around the world fought up until the last minute in hopes that a stay of execution would have been granted. However, on the night of Sept. 21, Mr. Davis closed his eyes for the last time on a gurney. America’s shame….

Vehicles packed Montgomery Street several hours before the start of the service, while a line of people leading to the church’s front door wrapped around the parking lot. The line was long to get into the front door.

Mr. Davis’ closed casket was flanked by two blown up images, one of him as a child and the other in a suit. Everyone received a 24-page color booklet filled with mostly images of the family’s many visits with Mr. Davis behind prison walls.

â€œTroy Davis turned the prison into a pulpit. He turned death row into a sanctuary. There’s some who think since Troy is gone that our fire is out. We are just getting started!â€ Rev. Raphael Warnock, pastor of Ebenezer Baptist Church in Atlanta, said in his eulogy.

â€œLoss is but a chapter but it’s never the whole book. Hold on for the whole book. Thank you to the Davis Family for schooling us on how to live on the other side of loss,â€ said Rev. Warnock.

I really loved his sermon.

Rev. Randy Loney, who frequently visited Mr. Davis, shared words from prisoners who were locked up with him prior to his execution. â€œThey said Troy was a good man that showed them how to be a man. They said he was an inspiration and that he mentally coached others who came to death row,â€ said Rev. Loney.

Many of Mr. Davis’ family members and childhood friends told me about the man they believe has been mischaracterized by the mainstream media.

Atlanta resident Anthony Corley, a cousin, said, â€œWhat you see today and what you’ve seen the past couple of years, shows that he was a great man. He was an innocent man and everyone knows that. You got people from all over the world that this guy touched and loved him.â€

So many people spoke highly of Troy Davis.

â€œThis was a story not only about one man, Troy Davis, but about everything that is broken, unjust, and deeply wrong with the death penalty and the suffering and harm it does to all who come near it,â€ said Larry Cox, executive director ofAmnesty International. â€œWe have to do more than just talk about it and cheer. And now the state of Georgia believes it is over. We are here today to say it is far from over. You ain’t seen nothing yet!â€

During the call-and-response litany of justice read at the service, the audience said in unison, â€œWhen we say, â€˜I am Troy Davis,’ it means we profess that we, too, are foot soldiers, united in the army of justice, never retreating, but pressing on until victory is won.â€

At the conclusion of the funeral, hundreds filled the streets outside the church chanting, â€œI am Troy Davis!â€

I am much more upbeat about all of this because I see now that this wasn’t just about Troy Davis. Like he said, this is about something bigger than himself. His faith was unshaken throughout these past twenty years and he was never worried about his own life. Therefore, he will never die.

Troy Davis’ body was laid to rest, but he’s celebrated as a martyr. The fight continues.

The news broke Wednesday morning that Troy Davis’ request for a polygraph has been denied and the parole board has rejected the last-minute appeal from his attorneys. He was denied clemency on Tuesday. His execution is set to take place by lethal injection in a matter of hours tonight at 7:00 pm EST at the prison in Jackson, Georgia.

According to a letter sent out by the NAACP, Troy Davis will refuse his last meal because he believes that his life will be spared. Supporters are being asked to fast with him tonight in solidarity and a rally will be held outside the prison in Jackson a few hours before the time of the execution.

Will this be his last day of life despite there being a huge cloud of doubt surrounding his case? Justice can’t be served by killing an innocent man.

People still calling and emailing Chatham County DA Larry Chisolm and Judge Penny Freesemann to demand withdrawal of the death warrant. There is just too much doubt.

No physical evidence, no murder weapon and you’re going to take a man’s life? To execute Troy Davis under these circumstances would be an appalling miscarriage of justice.

This doubt, attention and outcry for Troy Davis’ case is reminding many of us of Shaka Sankofa aka Gary Graham who was executed June 22, 2000 in Huntsville, TX.

In Houston,beginning at 5:30pm CST at S.H.A.P.E. Community Center 3903 Almeda – Houston, Texas, Muhammad Mosque No. 45 Office of Protocol and Community Outreach and The National Black United Front – Houston Chapter (NBUF) is calling together concerned community members to gather in vigil for the life of Troy Davis.

In Brooklyn, a rally/prayer vigil will be at 6pm EST at THE HO– — — USE OF THE LORD CHURCH (Rev. Dr. Herbert Daughtry, Founding Pastor) 415 Atlantic Avenue, between Nevins and Bond. Downtown, Brooklyn, New York.

Last night, per a text message sent to me from Martina, he sends the following message to supporters: “This struggle did not start with me and this movement should not end with me”.

I know President Barack Obama can’t pardon Troy Davis, but I wonder what he thinks about the case and if he feels he should have at least said something?

The Fight of a Lifetime for Death Row Inmate Troy Davis 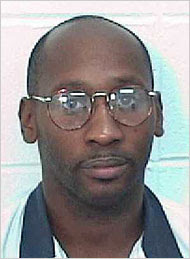 (FinalCall.com News)–When the news of his third stay of execution came down the news wire, Georgia death row inmate Troy Davis immediately called his eldest sister Martina Correia to share his thoughts about the spiritual significance of why his life is being spared while others want to take it away.

â€œTroy told me on the phone that he believes God keeps showing him mercy because he is not the one that committed this crime,â€ said Ms. Correia to The Final Call. â€œWe are elated about this stay of execution but he knows that he is not completely out of the woods. The prison officials have tried to break his spirit but they canâ€™t. He said thatâ€™s why they are upset.â€

On Oct. 24, the 11th U.S. Circuit Court of Appeals issued a 25-day stay of execution for Mr. Davis who had been scheduled to die on Oct. 27. Earlier in the month, the Supreme Court rejected an appeal from Mr. Davis. He was scheduled to be put to death in September before a stay was issued just two hours before the time of execution.

Mr. Davis, a Black man, was convicted in 1991 of the murder of White Savannah police Officer Mark MacPhail three years earlier. He has always maintained his innocence and his case has drawn worldwide attention and support.

â€œMy brother told me on the phone that he is grateful for all of the support he has received and the works of so many people around the world,â€ said Ms. Correia to The Final Call. â€œHe understands that his life is being dangled in front of him but he wonâ€™t let his faith be shaken.â€

Witnesses claimed Mr. Davis, who was then 19 years of age, and two others were harassing a homeless man in the parking lot of a Burger King restaurant when the off-duty officer arrived to help the man. Witnesses also testified at trial thatMr. Davisthen shot Mr. MacPhail twice and fled the scene.

Since Mr. Davisâ€™ 1991 conviction, seven of the nine witnesses against him have recanted their testimony and no physical evidence has been presented that links Mr. Davis to the killing.

â€œThis case can be pivotal. They understand that as long as Troy is alive, it increases the opportunity for their corruptness to be exposed,â€ said Ms. Correia. â€œIf Troy is freed it could shut down the death penalty system in Georgia and expose these rogue cops who get people to make false testimonies against others to secure convictions.â€