Hundreds Protest in Houston: ‘Killing Women and Babies is A Crime’

HOUSTON–Braving a decline in the city’s temperature, hundreds of mostly Palestinians convened on January 4 at a major Houston intersection to protest the present Israeli bombing of innocent civilians.

At the time of this writing, a reported 530 Palestinians have been killed since Israel launched its operation, including at least 100 women and children.

That figure includes 82 Palestinians killed since the ground invasion — 30 of them children and 20 women. In addition, nearly 2,800 civilian Palestinians have been injured.

Protesters from children to elders stood on the corner of Westheimer and Post Oak to send a message that ‘the massacre must stop’. The backdrop of the protest was one of the busiest Starbucks in the city, which organizers say was one of the reasons why that location was selected. 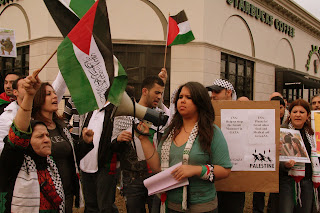 “Many don’t know it but 10 cents from every Starbucks purchase goes towards the Israeli army”, said Nawal Abouawad, 18, who was one of the lead organizers. “People who support the Palestinians should stop patronizing Starbucks. We are here to demand an end to the massacre.”

According to a leaflet being passed out to rally-goers, Starbucks CEO Howard Schultz is quoted from a 2006 speech saying “Every latte you drink at Starbucks is a contribution to the close alliance between the United States and Israel.”

Abouawad and a host of other young organizers led chants like “Free Free Palestine! Occupation is a Crime.” and “Killing Babies is a Crime!”.

Several in attendance also expressed their disappointment over President-Elect Barack Obama’s present silence on the issue.

“We have heard the excuse that there is only one President at a time but if he (Obama) has been addressing all of these other issues why is he silent on this?”, asked activist Hadeel Assali as she waved her flag. “It’s great that so many of us are mobilizing around the world but it’s unfortunate that it is falling on deaf ears.” 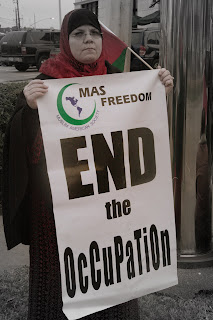 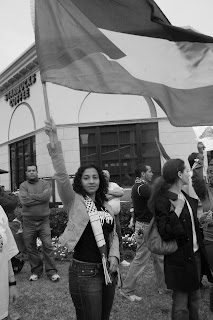 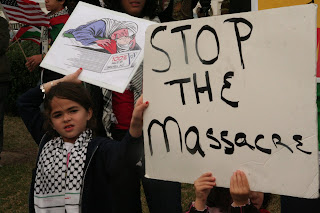 Mossad Masser spoke on the newly developed group called the Houston Coalition for Justice in Palestine which he says was created to “show a strong unified front of multiple organizations who want to speak out. It has been 60 years of killing innocent people. Enough is enough. I hope Obama will break his silence.”

68-year-old Ramez Azar, originally from Lebanon, said “Our people are suffering over there. We will continue to speak out. I voted for Obama because I wanted to see change. Bush is no good. So we need Obama to step up now. Don’t wait.”

“This is about fighting against injustice so I’m standing here today”, said Ester King, who chairs the local Black Heritage Society. “We are going to continue to back them because innocent people are dying.

Mr. King also stated that for the first time, the Palestinians will participate in this year’s BHS MLK parade on Jan. 19. “We have to unify. If Dr. King was alive today he would be out here with us in front of this Starbucks protesting.” 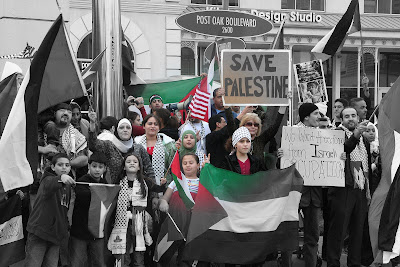 (All Photos by Jesse Muhammad)