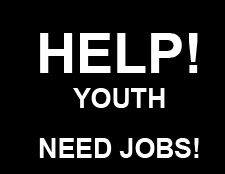 HOUSTON, Texas (FinalCall.com) – The pay is not much, but 17-year-old Crystal Washington is happy to still be working at a local fast food restaurant. Especially since recent statistics by the U.S. Labor Department shows staggering unemployment rates hitting her peers the hardest during the recession.

â€œI was honestly embarrassed to flip burgers and prepare fries, but there are so many young people out of work. So I am grateful,â€ says Ms. Washington, who has started her senior year in high school.According to the Labor Dept., the number of young Americans presently without employment rose to a post-Word War II high at 53.4 percent. Specifically, the employment rate amongst non-students from 16-to-24 year olds is taking the greatest nose dive. Nationally, nearly seven million Americans have lost jobs with young workers becoming the last hired and the first fired.

â€œDon’t get me wrong, I don’t plan to flip burgers my entire life because I am going to college. But at least I have some money of my own coming inâ€, says Ms. Washington. She has three siblings being raised by her single mother in an apartment complex in Northeast Houston.

Ms. Washington and her generation were not born when this series of statistics started being compiled by the government dating back to 1948. The youth unemployment rate has never exceeded 50 percent, but today’s picture is dismal with so many personal obstacles coupled with a struggling economy.

â€œIt’s hard on my mother, so I have to help out. Many of my peers are out selling drugs, stealing, and doing other things to survive. If young people are not employed or in school, we get into troubleâ€, says Ms. Washington, a future education major.

â€œIt was hard to keep applying and not getting any responsesâ€, says Tony Brown, 19, who chose not to go to college right after high school.

During July, young men led the pack with the highest unemployment rate at 19.7 percent compared to 17.3 percent for women. By race, Blacks and Hispanic led at 31.2 percent and 21.7 percent, respectively. Unemployment amongst Whites and Asians was almost identical at 16.4 percent and 16.3 percent.

â€œWe have witnessed that many young applicants even lack the basic reading and writing skills to complete a job applicationâ€, says Carla Lane, the CEO of a staffing agency based in Dallas, Houston, Beaumont and Orlando.

Read the full article at:–> Youth unemployment hits an all time high