Police Drama in the Deep South 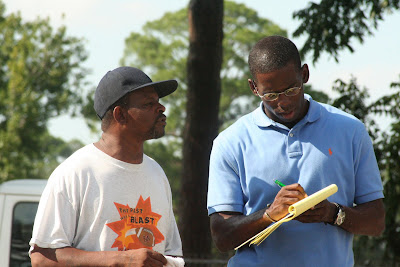 Police drama in the deep south

â€˜This was a brutal setup and killingâ€™

LAFAYETTE, La. (FinalCall.com) – â€œThis killing was something out of movie the way they took his life. Iâ€™ve never witnessed anything like this,â€ said Henry Sinegel to The Final Call.

Mr. Sinegel was on the scene the morning of the deadly shooting death of a Black male at the hands of a White Lafayette police officer. The family and community are calling it an organized hit based upon the victimâ€™s relationship with the daughter of a former White officer.

Gunshots resonated at the intersection of Mudd and Louisiana Avenues around 1:30 a.m. on July 26 at a local Circle K gas station, where a huge crowd of mostly Blacks coming from a night club were gathered. Police say Shane Damondwas spotted at the store in a vehicle that had been reported stolen and the officer tried to attempt to take him into custody. Police said Mr. Damond began backing up his car, dragging the officer. The officer let off four shots hitting the suspect and bringing the car to a halt, police said. Mr. Damond died shortly thereafter.

â€œHe [the officer]parked his vehicle and attempted to approach the suspect. At which time suspect began backing away with officer hinged on door,â€ said Cpl. Paul Mouton of the Lafayette Police Department. â€œThe officer was able to get his side-arm and fire at suspect, and vehicle was brought to a halt.â€

Other eye witnesses provided a different account. â€œThe police are lying. Shane did not run him [the officer] over. How could he get dragged and then shoot the man in the chest? The officer shot Shane through the front windshield in the heart. Then I saw him drag Shane out of the car onto the concrete and pat him down although Shane was already dead,â€ said Freddie Narcisse to The Final Call.

â€œWhy did he pat him down when he was already dead? This is a cover up. They killed an unarmed man. The police are always harassing Black people because they think all Black men sell drugs out here,â€ added Mr. Narcisse, who walked a Final Call staff writer through the entire scenario.

â€œIâ€™m going to have the image of this in my head for the rest of life. This was a brutal setup and killing,â€ said Mellissa Andrus. She is a former classmate of Mr. Damond and also witnessed the shooting. â€œI didnâ€™t see Shane try to drive over him. I saw that cop shoot him and then throw him out of the car like a hog or dog. The cops even lied to the family about which hospital they took the body to. This is crooked and wrong. If that cop was hurt why wasnâ€™t he taken into the ambulance too?â€

The officer reportedly will be placed on administrative leave until the conclusion of the investigation. The investigation has been handed over to the Louisiana State Police, which is the policy of the Lafayette Police Department.

According to Jasmine Zeno, a cousin of the shooting victim, the mayhem was a result of Mr. Damond dating the White daughter of a retired Lafayette cop who disliked the relationship.

â€œThis was a straight set up. Shane was dating his [the former officerâ€™s] daughter and he threatened Shane several times to stay away from his daughter because of a few altercations between the two. The vehicle that Shane was in that night belonged to the girl, so it wasnâ€™t stolen,â€ said Ms. Zeno. â€œMy cousin was killed for nothing because that cop wanted to get back at him. Why wonâ€™t the police let us see the body? Why did they lie to us about the hospital they took him to? It was all a cover up for a hit.â€

Ms. Zeno said the family has hired an attorney and is planning legal action against the police department.

Bernard Landry told The Final Call, â€œThese cops are out of hand and things have gotten crazier by the minute. Iâ€™m not surprised by this. Theyâ€™re killing Black people with tasers doing routine stops and cops are only getting suspended without pay, then put right back on the job. What are we to do? Some of us are sleepwalking.â€

The day following the shooting, several dozen protestors marched with signs in front of the Circle K to demand an end to police brutality. Cars honked their horns in support of those standing in the blistering heat in a call for justice.

â€œFrom the information we have gathered, this shooting was premeditated and a setup. There was no probable cause for this being that Shane did not have a gun or knife. That cop was not dragged by the car like they [police] are saying. This officer was on the hunt,â€ said Shannon X. He was on of the co-organizers of the march.

â€œThe people passing by were happy to see someone out doing something about this. We are upset about it. Weâ€™re going to continue to protest and push it until justice is served,â€ he said.

â€œIâ€™m glad to see us coming together. Iâ€™m glad that The Final Call and the Nation of Islam came here to investigate what has taken place,â€ said local videographer and activist Real Nitty. â€œI believe itâ€™s going to be a frenzy here real soon because itâ€™s the signs of the time. We canâ€™t let this one go. We going to the let the opposition know we are on the move just like they have been on the move.â€

â€œThe Black people here donâ€™t fear the drug dealers. They actually fear the ones who are supposed to protect and serve us. The police,â€ said longtime resident Patrick Narcisse. â€œThe police are the ones killing us. This town is still separated. If a group of young Black boys went over to the White neighborhood, they would immediately get harassed, but White folks can come into our area and do whatever they want to do. We got to stand up and stop being afraid. A war is brewing.â€