Hip Hop Pioneer KRS-One says: “The purpose of education is to discover yourself” 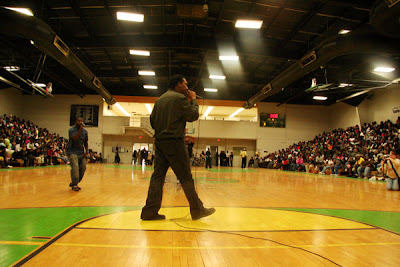 The Stop the Violence Movement (STVM) Lecture series hosted a rally in the gymnasium of North Forest High School on the Northeast side of Houston.

The headliner was one that many in this new generation may not have recognized instantly by face but would soon connect with the resonating tone of his delivery.

It wasn’t a concert but Kris Parker, also known as KRS-One, touched the hearts and minds of the high school students with a rhythmic message of enlightenment.

“The purpose of your education is not for you to get a job. It is for you to discover yourself and be a better you”, said KRS-One, who founded the STVM when his partner was tragically murdered trying to break up a fight in 1988.

Nearly 20 years after its initial launch, the Stop the Violence Movement has returned during a time when Black on Black violence is at a zenith throughout the inner cities of America. The STVM is embarking on a multi-city tour spreading the message of Peace.

“Success is based on you being you. If you can’t be the real you, success is impossible. A fake you can never be successful”, said the hip hop legend on January 23. “If you’re going to be successful, you have to see yourself in the future.”

According to its website, the STVM has inspired and informed hundreds of thousand middle and high school students, by providing outreach programs such as an online youth forum, a mentor program, lectures, conferences, workshops, symposiums.

Other speakers at the rally included North Forest ISD administrators preceded by performances from local hip hop artists. KRS-One also hosted a concert at the Meridian that evening.

(For more information about the STVM visit: www.stvsite.org)