Rosemont, Illinois–Rapper Snoop Dogg made an appearance at the Nation of Islam’s annual Saviours’ Day convention for the first time as a special guest seated on stage during the keynote address by the Honorable Minister Louis Farrakhan on March 1.

Snoop spoke before the capacity crowd at the Rosemont Theatre to deliver words of support.

Snoop also noted that people do not give Minister Farrakhan enough credit for his work in Hip Hop although he has mentored so many in the genre to help defuse many beefs in the past and has shown them their power unlike anyone else.

He later told AP that “When you get a speech from Minister Farrakhan it’s about a mirror, it’s about looking at yourself. It’s about seeing yourself and what you can do to better the situation … We’re doing a lot of wrongs among ourselves that need correcting.”

Rapper T.I. appeared via a recorded video. He was unable to attend in person but stated “I would like to welcome you all to Saviours’ Day. I would like to personally apologize to the Minister and the Nation for not being able to be present physically.” 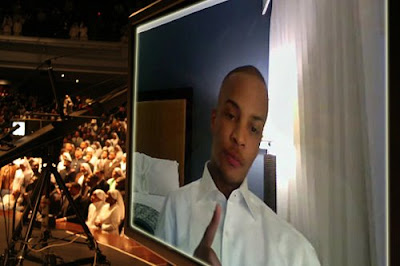 T.I. continued by stating that “success on any level begins with education. The things you don’t have will be a reflection of the things you don’t know. Your environment does not define you unless you allow it. You can take where you are in life and use it one or two ways. You can use it as motivation to push yourself forward and never look back. Or you can use it as an excuse to stand still, do nothing and go nowhere. The choice is yours.”