DO WE NEED GOD or AWAY WITH ALL GODS? A debate between Student Minister Robert Muhammad and Sunsara Taylor

A capacity crowd witnessed as the two dialogued on the questions: Is religion a creation of humanity whose time has long passed? Or, does it serve some deeper need of human beings? Are beliefs in God(s) obstacles or are these beliefs pathways to understanding and changing the world and to the emancipation of humanity?

The event was co-sponsored by The Barbara Jordan Institute for Policy Research at TSU, Poetry & Politics Club at TSU, The Houston Revolution Club, â€œAway With All Godsâ€ Houston Tour Committee. 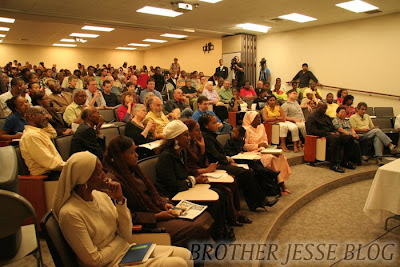 Brother Robert Muhammad is the Student Southwest Regional Minister of the Nation of Islam. He hosts â€œConnect The Dotsâ€ talk show on KPFT 90.1 FM and is a long-time activist in the struggle against police brutality, racial profiling, the death penalty and the war in Iraq. Min. Muhammad served as a spiritual advisor and witness to the executions of O’Dell Barnes and Shaka Sankofa, aka Gary Graham, and helped organize the 1995 Million Man March and the 2000 Million Family March.

Sunsara Taylor writes for Revolution Newspaper and is an uncompromising atheist. She is currently on a national campus tour on the 2008 book, Away with All Gods; Unchaining the Mind and Radically Changing the World, by Bob Avakian (Insight Press). Taylor has been featured in/on The New York Times, The Oâ€™Reilly Factor, and CNNâ€™s Showbiz Tonight. Ms. Taylor also co-hosts the WBAI ( Pacifica ) radio program “Equal Time for Free Thought”.

The MOI Design Engineers of Muhammad Mosque No. 45 in Houston will be posting the debate online soon!

DO WE NEED GOD or AWAY WITH ALL GODS? A debate between Student Minister Robert Muhammad and Sunsara Taylor was last modified: July 8th, 2015 by BQ Blog Staff
July 8, 2015
0 Facebook Twitter Google + Pinterest