The Teachings 2.0: Twitter Sayings of The Honorable Minister Louis Farrakhan

Over 5,000 social media questions answered by The Honorable Minister Louis Farrakhan since 2011. Two volumes released thus far with more forthcoming. Add these to your personal collection today by shopping online at the 1000% Black-owned Final Call online storehouse of truth.

You will find answers from Minister Farrakhan to questions related to Religion & Spirituality, Health & Wellness, Marriage and Family, Youth, Education & Leadership, Business Economics, Social, Politics & World Affairs, Arts & Culture and ‘Getting to Know’ Louis Farrakhan & The Nation of Islam.
⠀⠀⠀
If you’re a young minister, pastor, imam, or community leader, we invite you to get this book to feed on this daily bread. You will find so much within these pages to guide your messages; from the rostrum to the streets. Consider buying a case for your mosque, church, organization, school or your next event. This is a very special gift that young people will love; and adults too. (smile)

All Praise is Due to Allah! WOW, my brother Eric Muhammad and the mighty students of his Islamic Sciences class at The Elevated Places TOTALLY surprised me today!! They invited me to the campus for a special book-signing for Volume 2 of “The Teachings 2.0: Twitter Sayings of The Honorable Minister Louis Farrakhan”.

But I had no idea they would have me to do an in-depth one-on-one interview with the multi-talented star Sister Ayah on a wonderful set they created with a live audience!! They showed out!

I thoroughly enjoyed the dialogue and the entire time signing books and taking photos. They truly set the tone as I prepare, by Allah’s Grace, to hit the road for #TheTeachingsTour to spread this blessed book on behalf of The Honorable Minister Louis Farrakhan. THANK YOU FOR THE LOVE EP!!

Yesterday afternoon, I had the honor of being the guest speaker at the 2nd official meeting of the newly-formed revolutionary African-American Culture Club (@aacckf) on the campus of Klein Forest High School.

In my short presentation, we touched on True #BlackHistory, Finding Purpose, Being A Difference Maker, The 5 P’s Of Organizing, and Why Their Generation is The Answer to The Prayers of Our Ancestors.

This was followed by my favorite part: Q/A and plans for follow-up action! This growing group inspired me more than they know. Thank you to all of the club officers (Medina, Jessica, Deaven, Kharee) and club sponsor (Coach Fobbs) for inviting me and for all of the gifts including the African medallion✊?. I am looking forward to coming back soon! • #TheTeachingsTour #ForTheCulture #KleinISD

You Are the Answer to Someone’s Prayer – My words to the students at Klein Forest High School was last modified: January 11th, 2019 by BQBlog Staff
January 11, 2019
0 Facebook Twitter Google + Pinterest

No better way to spend my morning! I love speaking in schools; brings me joy every single time. Blessed to be among the guest speakers invited back to address multiple classes at Missouri City Middle School for their career day aka FIND YOUR PURPOSE DAY.

Sharing with the students words from The Honorable Minister Louis Farrakhan on how they are the greatest generation we have ever produced and that each one is an answer to someone’s prayer! This has sparked some magnificent responses from them.

It’s all about uplifting them, not condemning.

Thank you again to the administration of Missouri City Middle School for the blessed opportunity to speak to your mighty students for career day. This was my fifth year participating and I’m always touched when I run into former students who remember the words I shared. More seeds planted today! All Praise is Due to Allah!! #Motivation #TheTeachingsTour #MissouriCity

Sharing with the students at Missouri City Middle School words from The Honorable Minister @louisfarrakhan on how they are the greatest generation we have ever produced and that each one is an answer to someone’s prayer! This has sparked some magnificent responses from them. It’s all about uplifting them, not condemning. #Motivation #TheTeachingsTour

When you’re speaking to this new generation: Be Short and Effective vs. long-drawn-out. They are sharp & will gravitate to that which feeds their nature.

Get to the point.

During my multiple talks yesterday, I spoke no more than 10mins then Q/A. #TheTeachingsTour #speakingtips pic.twitter.com/bR7HPEnUg4

Sharing with the students, at Missouri City Middle School, words from The Honorable Minister @louisfarrakhan on how they are the greatest generation we have ever produced and that each one is an answer to someone’s prayer! https://t.co/P9Ha6VT85F #TheTeachingsTour pic.twitter.com/E9xilj4v8A

[Replay] The Divine Grind of Farrakhan: What Fuels the Man of God?

Today I was honored to get back onto the Witness Stand at Muhammad Mosque No. 4 in Washington, D.C. on the subject of “The Divine Grind of Farrakhan: What Fuels the Man of God?” Click below to view the full replay. #NOISundays

written by BQ Blog Staff
Originally published 5.13.15
By Ebony S. MuhammadÂ (Source: Hurt2HealingMag.com)
â€œIâ€™m not here to teach you how to take a better selfie. Iâ€™m here to talk about Social Media Warfare.â€Â â€“ Brother Jesse Muhammad (4/11/15 â€“ Chicago, IL)
History was made at the National Center of the Nation Of Islam in ways that could only be articulated as a modern technology in motion. In conjunction with the Honorable Minister Louis Farrakhan speaking twice in a single day in Atlanta, Georgia, members of the mighty Farrakhan Twitter Army hostedÂ The Teachings 2.0 Book and Social Media Warfare TourÂ featuringÂ Brother Jesse MuhammadÂ of Houston, Texas. Brother Jesse currently serves as the social media strategist for theÂ Honorable Minister Louis FarrakhanÂ and is the liaison to the ever-growingÂ Farrakhan Twitter Army.
The Social Media Warfare Seminar took place on Saturday, April 11, 2015 atÂ The Salaam RestaurantÂ located at 700 W. 79th Street in the heart of South Chicago.
Sister Kenya Muhammad, one of event organizers, gave a warm welcome to those in attendance and also served at the hostess introducing each speaker.
The seminar began withÂ Halimah Nia MuhammadÂ of Detroit, Michigan who presented on the â€œPower of Modestyâ€. Her opening words would set the tone for the entire program. â€œWhat we see on social media is not of God, so I come before you saying there is No God but Allah!â€
Sister Halimah spoke against the morally depraved mainstream fashion trends and promoted the beauty of being a modest model for God. She elaborated on how the worldâ€™s definition of beauty has ill-effected women and young girls. She explained how it damages the self-esteem of a woman to attempt to measure up to the loose fashion trends of today.
The Salaam Ballroom was packed with many young faces, families, as well as a few of the Student Officials of Mosque Maryam.
The next presentation was a live performance from Cincinnati-based Hip Hop artist,Â Brother Michael 6X. He has been accompanying Brother Jesse on The Teachings Tour performing what has been affectionately called â€œThe Teachings 2.0 anthemâ€ that describes the contents of the Twitter Book and the power it contains. Brother Michael engaged the crowd with his masterful demonstration of righteous Hip Hop.
Following the live performance was what everyone had been waiting for. The honored guest speaker, Brother Jesse Muhammad, and his presentation of the â€œSocial Media Warfareâ€ seminar.
Brother Jesse opened up thanking the Honorable Minister Louis Farrakhan for his work, dedication and love in the Mission of resurrecting the spiritually dead. He also thanked the Student National Assistant to the Honorable Minister Louis Farrakhan, Brother Ishmael Muhammad, and his staff for the opportunity to bring The Teachings Tour to Chicago.
Brother Jesse began to give the backdrop of The Teachings Tour as well as the hashtagÂ #AskFarrakhan.
He delved into The Supreme Wisdom lessons as it refers to The Lion seeking a way of out of the cage using modern equipment. â€œWe think weâ€™re going to attract these young people with what we used to doâ€, Brother Jesse said. â€œMost people are more comfortable with old problems than they are with new solutionsâ€.
[READ MORE]
Advertisement: 20th anniversary of the Million Man March 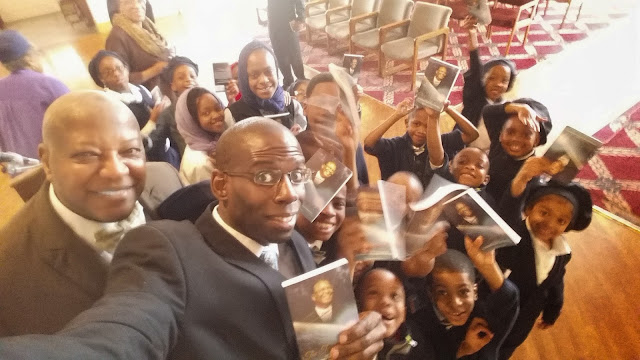 Â Originally published 5.7.15
by Shahida Muhammad
There are some people who talk about what needs to be done to improve the issues that plagueÂ ourÂ communities, and those who restlesslyÂ move out on those ideas to make an impact. Renowned journalist, blogger, and motivational speaker,Â Jesse Muhammad, would be among the latter.Â Known by most as simplyÂ Brother Jesse, the Houston-native has become a respected change-maker through his ongoing commitment to serving others and encouragingÂ Black youth in particular to recognize their greatness. Itâ€™s an honor to share his current widespread effortÂ â€“ The Teachings Tour.Â
A seasoned social media strategist, Brother JesseÂ has been on a non-stop mission to use the power of the Internet to spread awareness and positivity, while continuingÂ hands-on actions withinÂ the community.
In promotion of his latest project, he has embarked on the â€œThe Teachings 2.0â€³Â book tour,Â taking aÂ message of empowerment initiated by the work of the Honorable Louis Farrakhan to young people across the country.Â After creating a huge youth-led movement of thought-provoking and spiritually enlightening tweets by assisting Minister Farrakhan withÂ his social media presenceÂ â€“ which has incited powerful dialogue under the highly-popularÂ #AskFarrakhan and #TheTime hashtags â€“ the first edition of â€œThe Teachings 2.0â€³ was released last year as a much anticipated compilation of the Ministerâ€™s tweets of wisdom. [READ MORE] 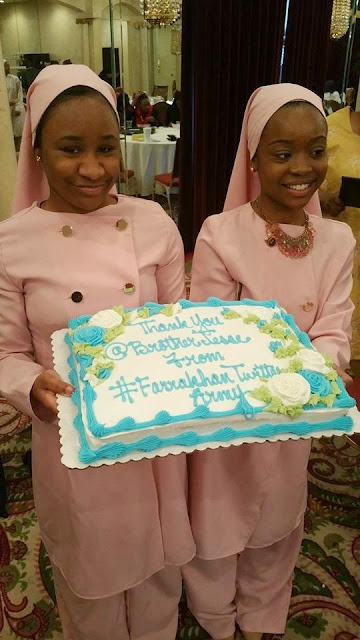