Muhammad Ali and His Meaning to The Hip Hop Nation

Can you blame my generation, subjected gentrification,

Depicting their frustrations over ill instrumentation

Cause music is the way to convey to you what I’m facing,

Placing my life in front of your eyes for your observation

Now if you can’t relate then maybe you are too complacent,

In the beginning of June, the world experienced the loss of one of its most beloved personalities not just in the area of sports, but in life itself, who most notably demonstrated through his example how to stand for justice in a world that is antithetical to its true ideals and practice. That personality is none other than Muhammad Ali. Many artists in Hip Hop have historically been inspired by his boldness and heroism to stand up, speak to power and refuse to back down. The list includes Nas, Jay Z, Will Smith, EPMD, The Sugar Hill Gang, Kanye West, T.I., Master P, Migos, The Fugees, The Game, Common, The Illegal Broadcasters (Hakim Green and General Steele) and even Drake. However, Muhammad Ali’s roots in Hip Hop are deeper than giving honor by shouting him out in song lyrics. Muhammad Ali was known in his heyday to freestyle rhyme about himself and his opponents while on camera, inspiring many young people who were observing him and would later grab the mic and rock crowds at concerts and emcee battles in similar fashion.

Known as Cassius Marcellus Clay, Jr. for the first 22 years of his life, it was The Honorable Elijah Muhammad that gave him the powerful name Muhammad Ali after registering in The Nation of Islam and winning The World Heavyweight Boxing title in 1964 (Muhammad meaning “one who is worthy of praise” and Ali meaning “the most high”). Two years later, Ali faced a greater challenge outside the ring than any opponent he ever had to face in the ring. He refused to be drafted into the US military to fight in what he and many in the world viewed as an unjust and immoral war in Vietnam. Because he did so, he was stripped of his title and put on house arrest. Supported by The Honorable Elijah Muhammad and The Nation of Islam, Ali appealed his case of conscientiously objecting to participating in the war all the way to the highest court in the land, The Supreme Court. His conviction was overturned by The Supreme Court in 1971. In accurate historical context, it was The Teachings of The Honorable Elijah Muhammad that gave him the courage to stand up for what was just and what was right and to fear nothing but Allah (God) Himself. However, at Muhammad Ali’s memorial service on Friday, June 10th in Louisville, Kentucky, Ali’s wife Lonnie said that it was “Al Islam, true Islam” that inspired him to stand for justice. Not only this, but none of the speakers, with the exception of Bryant Gumbel, made any reference to Muhammad Ali’s first teacher in Islam, The Honorable Elijah Muhammad (Gumbel’s reference was limited to seeing and meeting Ali while visiting the home of The Honorable Elijah Muhammad in the same neighborhood that he lived).

Minister said that they were surrounded by police and closely monitored as if they were going to attack someone. While I can very easily defend the point that the followers of The Honorable Elijah Muhammad do in fact practice “True Islam,” Lonnie Ali’s statement and the treatment of The Minister, his family and The Nation of Islam at the memorial service speaks to a larger agenda in place. According to The Nation of Islam Research Group, referencing a New York Times article, Muhammad Ali’s funeral was “produced” by SFX Entertainment, Inc., headed by Jewish businessman Robert F. X. Sillerman, which owns eighty percent of the rights to Muhammad Ali’s name, image and likeness resulting from a $50 million business deal set up in 2006.

Just as the enemy has sanitized Malcolm X, he has sanitized Muhammad Ali and has worked to erase the history of how he came into consciousness (Knowledge of Self). Ex-President Bill Clinton emphasized at the memorial service that the “most important part” of Muhammad Ali’s life was the second half, in which he battled Parkinson’s Disease; totally disregarding and intentionally leaving out that the one who taught him how to build his faith in order to overcome trials externally as well as internally was in fact The Honorable Elijah Muhammad. As The Honorable Minister Louis Farrakhan has pointed out, the acts described above were and are geared towards keeping the masses of the people from The Honorable Elijah Muhammad and today The Honorable Minister Louis Farrakhan, two leaders that have taught their people to truly love themselves and become self-reliant and independent.

Yet and still, The Minister highlighted in his lecture how a great deal of the distancing also came from Muhammad Ali himself. When The Honorable Minister Louis Farrakhan was rebuilding The Nation of Islam in the late 1970s (falling after the departure of The Honorable Elijah Muhammad) Ali turned down to help The Minister, indicating in few words that it would tarnish the success that he had achieved as a boxer, a career that The Honorable Elijah Muhammad wanted him to let go of years prior. A few years later, Ali was diagnosed with Parkinson’s Disease popularly argued for receiving too many blows to the head while boxing. Although, many others have alluded to his condition also resulting from being ill and overly medicated while experiencing a thyroid problem prior to a boxing match.

What lessons can the Hip Hop Nation learn from Muhammad Ali’s life and trails? Firstly, just as there has been a working to distance Muhammad Ali from the foundational roots of his birth into consciousness, the enemy in the form of the commercial music and entertainment industries, the fashion industry, the prison industry, the education industry and their investors have worked for over three decades to divorce Hip Hop from its foundational consciousness that from very its very inception worked to end violence in our communities and have the youth come into the knowledge of their True Divine Selves. Because of the disattachment that has been fostered, which we have had a great part to do with in our own pursuit of fortune and fame, our communities continue to suffer from high rates of violence, homicide, incarceration, poverty and ailments resulting from the foods, liquor and toxic products that we regularly consume. In order for the self-destructive path to have a chance to being curtailed, we, the elders and those of us who fastly approaching eldership in

our Universal Culture must increase our efforts to first improve the quality of our own lives through spirituality, diet and overall better and healthier life choices and work to provide guidance to the youth. We must also work to atone with others we have “beefed” with and hurt in our lives in order to demonstrate cross-generationally that there is a better way for our communities.

We should also become actively involved in conflict resolution initiatives wherever we can be a part of them. In our guidance to the younger generations, we should not take a judgmental position in the way and manner in which they convey a conscientious message. Financially supporting one another through business initiatives is a crucial part in this process. We must set up alternative institutions that serve as rewarding outlets that put our Gifts and Talents to good use; demonstrating that financial success does not have come

through “signing our lives away.”

Every vessel is Divinely Chosen to perform a task and the way and manner through which the message is conveyed serves as a part to bring about peace and prosperity among us in every way imaginable; closer and closer in our fulfillment of the true embodiment of a refined Hip Hop culture and movement; a vision closer and closer to the way that our Beloved Brother Muhammad Ali himself saw as being our duty to one another. Ali himself put it beautifully, “Service to others is the rent you pay for your room here on earth.”

Until next time, Peace!

Tony Muhammad has been teaching Social Studies and Humanities in Miami-Dade County Schools for over 17 years. Tony is most noted for his work as publisher of Urban America Newspaper (2003 – 2007) and co-organizer of the Organic Hip Hop Conference (2004 – 2009).  He currently serves as a student assistant minister to Student Minister Patrick Muhammad at Muhammad Mosque #29 in Miami, Florida.

Inspirational: Will Smith, Jada Pinkett-Smith & Their Children On Oprah!

written by BQ Blog Staff
Originally published 5.18.10
This is motivation.
On yesterday, my friend posted a comment on Facebook about her reaction to seeing Will Smith, Jada Pinkett-Smith and their children on The Oprah Show. I hate that I missed it although I don’t watch Oprah. I don’t use this term much, but I have been a big fan of Will & Jada for years. Jada was my first and only celebrity crush back in high school (smile) plus her mind is powerful. Will’s evolution as a business and family man has inspired me in many ways. Plus he’s in my top three actors list right now, hands down.

So, I first went to Oprah.com to watch the recap of the show and the clips are phenomenal. Just as we are in awe of the Obamas, the Smith family is just as powerful. A great example of Black love. In this interview they are teaching interesting lessons on marriage, love, purpose, parenting, goals and more.

The entire interview was posted on WorldStarHipHop.com.

Enjoy and please let me know your thoughts.

First let me give credit where credit is due. I came across the following interview by Tavis Smiley with Actor Will Smith on GlobalGrind.com in a blog post by actress Sanaa Lathan. We are among the many celebrity bloggers on that site. Thanks Ms. Lathan.

I enjoyed watching this as Will Smith breaks down the power of hard work. He says “You may be smarter than me, have more talent than me–but you will NOT outwork me.”

What type of posture do you have when it comes to putting in work? Are you focused?

Click below and check it out for yourself and let me know if you have the same type of work ethic he is describing. 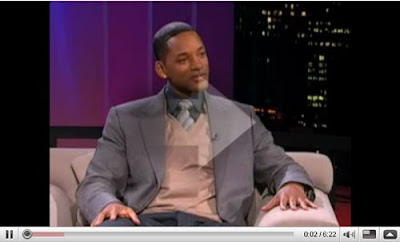