Home Perspective The Fruit of Islam: We are Not Paperboys
Perspective

The Fruit of Islam: We are Not Paperboys

Every week around the country and in parts of the world, a group of men can be found in the streets or going door to door with a newspaper.

It is the only remaining nationally distributed Black-owned weekly newspaper in the United States. It is also read thousands of miles away on other continents.

That paper is The Final Call.

But it’s more than just a paper. It’s a tool used to resurrect those who are mentally and spiritually dead. It is water to a man dying of thirst. It is news made relevant to the everyday struggles of the masses. It contains self-improvement guidance from the founder and publisher the Honorable Minister Louis Farrakhan

I read my first copy of the Final Call as a freshman in high school and I found it to be very unique. It was filled with stories about poor people that I didn’t see on cable or in the other local papers we received at our doorstep.

Then I started seeing men dressed in dark suits, white shirts and bowties offering this same paper to people passing by in their vehicles. Those men are the Fruit of Islam (FOI), the wing of the Nation of Islam that trains men.

One brother on the street corner would yell “Final Call my brother?” and another may say “Get the latest and greatest addition young brother”. People such as myself would buy one while others would reject them, curse at them, yell at them, speed by them, and call them out of their names.

I even asked myself, “What in the world would make a man wear a suit in Houston’s 100 plus degree heat to sale me a newspaper?” 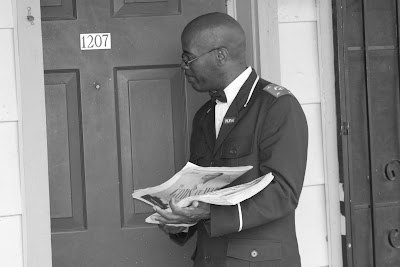 In 1997 I joined the NOI and for the first time I got on the corner of Homestead and Tidwell in Northeast Houston to sale the FCN. Within a few minutes I got cursed out by a non-Muslim and after two hours I had no sales. But we have been taught to not give up.

And then a man drove up to a red light and said “You must be crazy. It’s hot out here!” I remember just smiling at that person and saying “The guidance contained in this paper is worth the sacrifice of a few hours in the Sun”. He looked at me, pulled out a dollar and bought a copy.

Despite what people may think, we are not paperboys…we are servants. Just like everyone else, we believe in our brand. Our brand is The Final Call. We read it, discuss it, teach it, distribute it and represent it.

Every FOI that has ever sold one copy of this paper could write volumes of books because many have been shot at, nearly hit by cars intentionally, arrested, had doors slammed in their faces, threatened and more stories that you wouldn’t believe….but they are real.

So the next time you drive by and you see that sharply dress brother offering you the Final Call or hearing him knocking at your door, give him a moment to tell you about a newspaper that may change your life. 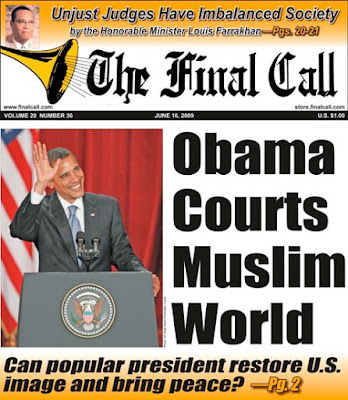 Be sure to pick up the latest copy (pictured above) at your local Nation of Islam Mosque or Study Group. Want the paper delivered to your doorstep? Subscribe Now and get 3-months for only $10 at: store.finalcall.com/subscribe/ or call 1-866-602-1230 ext. 220

The Fruit of Islam: We are Not Paperboys was last modified: July 13th, 2015 by AQM Blog Staff
final call newspaperFOINation Of Islam

“Bethune: Out of Darkness, Into the Light of Freedom” is a must read book. Best-Seller Day Campaign on June 11, 2009

The Attracting Power of So-Called â€˜Gangs’: Should churches, schools and community organizations study it?

MALCOLM X IS BIGGER THAN A T-SHIRT OR RAP VERSE

How To Eat To Live Cooking Show: The Navy Bean! (NFA Studios)

“Slavery Was In The Past!” and Other Ignorant Arguments Pt. II

No Individual Can Rise Above the Condition of His People

CHILDREN OF THE MOST HIGH: It Takes a Village

Webster Is A Weak Argument For Defining Racism

“Sex and the City II”: A Muslim Convert’s Take

CHILDREN OF THE MOST HIGH: The Chemistry of Thought, Homosexuality and the Womb

In Pills We Trust: Are Doctors Helping You Or Hooking You?