The White House Agenda: What role can we play in Obama’s proposed Urban Policy?

I don’t know about you, but every week I am visitingwww.whitehouse.gov to educate myself on the proposed policies of President Obama and his administration. And ask myself “What can you do?”

Today I read over the White House Proposed Urban Policy. I came across the Criminal and Law Enforcement section that states in part that Obama wants to:

“Reduce Crime Recidivism by Providing Ex-Offender Supports: America is facing an incarceration and post-incarceration crisis in urban communities. Obama and Biden will create a prison-to-work incentive program, modeled on the successful Welfare-to-Work Partnership, and work to reform correctional systems to break down barriers for ex-offenders to find employment.”
I immediately thought about the work that is being done in Houston by a group of hardworking Believers from Muhammad Mosque No. 45. They launched a series of expungement workshops aimed at giving ex-offenders a second chance at life. To date over 1000 persons have attended these sessions and over 40 percent have qualified to have their records handled in such a way to open doors for them that are normally shut to ex-offenders. 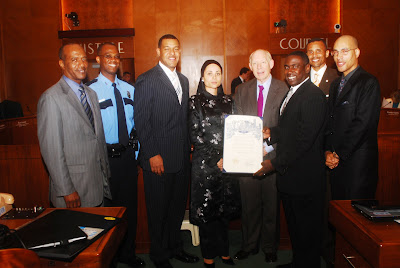 They were recently presented with a proclamation by Houston Mayor Bill White and Council Member Jarvis Johnson for their hard work. My whole point is that there are many groups, known and unknown, that have been working on the grounds to help people for years.

Let’s unite our resources and BE the change.

Don’t sleep on the social networking opportunities…wake up!

Open Letter from Executive Council of the Nation of Islam to Reps. Danny Davis, Gregory Meeks and Barbara Lee

Haiti earthquake survivor: “I am still very traumatized from seeing that many dead bodies.”

All roads lead to peace with dedication and work