Originally published
Twitter users from across the country and the globe took a break from watching football games to tune into the live webcast of the Honorable Minister Louis Farrakhan on October 18. Culminating a weekend of events, Min. Farrakhan delivered the keynote address commemorating the 14th anniversary of the Million Man March. The main story will be covered in an upcoming edition of the The Final Call newspaper by Assistant Editor Ashahed M. Muhammad.

With the hashtag #mmm, Twitter started buzzing with anticipation as staff members from The Final Call Newspaper launched live tweets from the beginning of the webcast all the way until Min. Farrakhan closed out.

Tweets started streaming from @TheFinalCall, @BrotherJesse, @NisaIslam, @JasirX, @beansouptimes and more! Soon quotes from Min. Farrakhan started being retweeted along with dialogues surrounding some of his comments. Thank you to everyone who put the word out via Twitter!

@whatstodaysmath TheFinalCall: RT @BrotherJesse “The media from all over the world came because they expected Black men to act a fool”–Farrakhan #mmm

@alwaysmsB The world fears the RISE of Islam-Farrakhan #mmm #truth

@jazzzyone He’s making 2 much sense… RT @girly1121 RT @BrotherJesse “He (Obama) is the American President, not the Black President”–Farrakhan #mmm

@jawbonin_com Evil folks r going to mix Min. Farrakhan’s words like a dj on the 1s & 2s #mmm If ur smart you’ll listen 4 yourself http://noi.org/webcast

@DryerBuzz @TheFinalCall Farrakhan says the Million Man March was a gathering unlike anything ever in the US or the world. #mmm

@drgoddess True! RT @BrotherJesse: No offense to anyone, but Farrakhan can break down things like nobody else #mmm

@wombleswyrd soooo anxious to get home & listen to Farrakhan #MMM

@planetMATH I’m not a big fan of Farrakhan but he’s dropping science about nine eleven right now http://bit.ly/3RvYaD (via @BrotherJesse)

A special thank you to Final Call Staff Writer Nisa Islam for this exclusive photo of the Chicago based group The Buckets Boys, who performed in the pre-program in Memphis. The group works with NOI Top Fisherman Warren 2X. 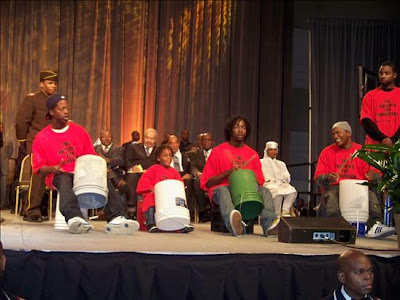 Farrakhan advises: “..if we don’t get busy producing jobs for ourselves, we will be lost as a people.”

Minister Farrakhan: “We Owe Our Lives To God.”

The Teachings 2.0 Podcast – EPISODE 2: The Significance of The Trumpet

Minister Farrakhan meets with the Supreme Leader of Iran

INTERVIEW:: The Role Of The Ministry In A Time Of War feat. Rashad Muhammad

Minister Louis Farrakhan: “You do not need a Christmas tree in your house. That’s pagan practice.” ⠀

An Operation on the Hearts, Minds and Spirits of those in Leadership